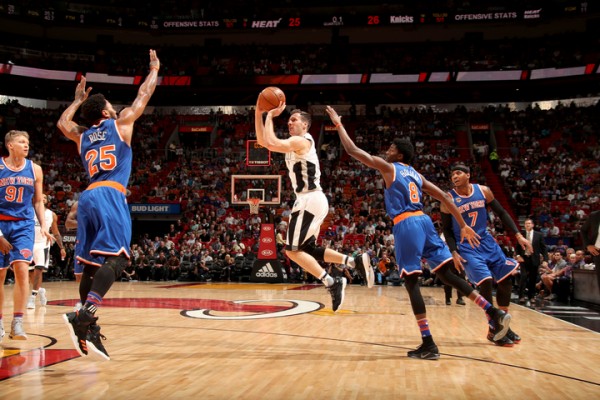 Nine-time NBA All-Star Carmelo Anthony went off in Miami and scored the most points by a single player against the Heat so far this year, as the Knicks small forward exploded for 35 points (13-of-27 shots made) to go along with his four rebounds and two assists.

The Heat, who led the Knicks by as many as nine points on two separate occasions during the second quarter, simply could not build on their 54-53 lead after halftime.

“We were in line for a great dogfight going down the stretch,” said Heat head coach Erik Spoelstra. “I just don’t remember the last time we’ve been beat up on the glass like that.”

Miami point guard Goran Dragic had his highest scoring output in a Heat uniform as he went off for a team-high 29 points to go along with seven assists and four rebounds. The Slovenian continues to thrive as the Heat’s primary ball-handler as he’s now averaging 23.4 points and 9.0 assists over his last five games.

Heat center Hassan Whiteside had another magnificent game, as the rising star racked up another double-double en route to 23 points, 14 rebounds and three blocked shots on the night.

Newly-acquired point guard Derrick Rose, who left the game during the third quarter due to back spasms, finished with 10 points, three assists, two steals and two boards.

The Heat continue to be absolutely decimated by injuries, as they dressed only nine players on Tuesday night and might have to remain short-handed for the next few games.

Up next, the Heat will hit the road again to take on the reeling Atlanta Hawks (10-12) at Philips Arena on Wednesday night. The contest, which is scheduled to tip off shortly after 7:30 p.m. ET, will be broadcast live locally on Fox Sports Sun.
[xyz-ihs snippet=”Responsive-ImagenText”]