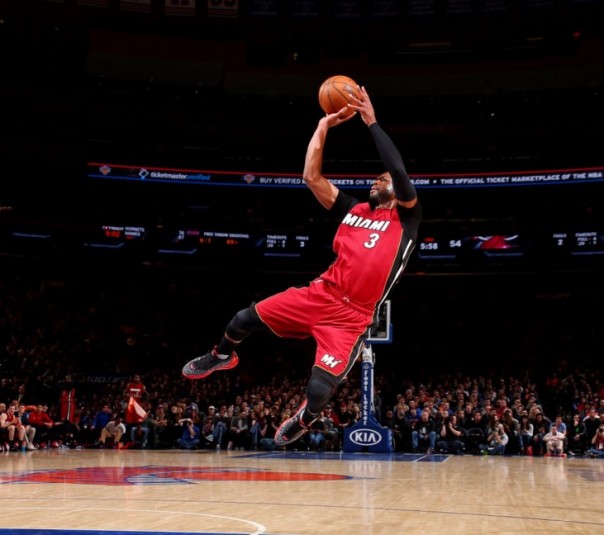 (New York, NY) – Leading from start to finish, the Miami Heat put an end to their two-game losing streak as they knocked off the New York Knicks with a 98-81 win at Madison Square Garden on Sunday night.

Miami held off multiple New York runs during the course of the game before clamping down on defense in the fourth quarter, outscoring their opponent 29-16 to pull away for the victory.

Showing strong ball movement throughout the contest, the Heat ended the night with 25 assists, with the starting backcourt of Dwyane Wade and Goran Dragic leading the way with six apiece. Wade led all scorers with 26 points and added seven rebounds, while Dragic contributed 13 points and three rebounds.

Wade and Dragic were joined by three other Miami players who scored in double figures, with Hassan Whiteside picking up a double-double with 16 points and 11 rebounds.

“It can be a secondary option when it comes about organically,” Spoelstra said. “But we’re not necessarily going to run catch and shoots for him like he’s Ray Allen.”

Although held scoreless, rookie Justise Winslow made his mark elsewhere by grabbing 13 rebounds and dishing out four assists.

After signing with Miami yesterday, veteran forward Joe Johnson was inserted into the starting lineup and played 30 minutes. He scored 12 points, handed out three assists and collected three rebounds.

Spolestra was asked about starting Johnson:

“We wanted to get him in his comfort zone with familiar players,” Spoelstra said. “It made for an easier transition.”

Johnson spoke about his debut with his new team and said the Heat told him he would start when they signed him:

“I thought I made a couple of mistakes, but I played through them,” Johnson said. “Erik’s confident in what I can do. This is different, but I’m up for it.”

The Heat jumped out to an early 13-2 advantage, hitting six of their first eight shots. However, by the end of the quarter, that margin had been chipped away to four with Miami holding a 23-19 lead.

After intermission, Miami was on the verge of breaking the game open by taking a 62-49 lead, but New York again chopped the margin down with a 16-7 run to close out the third quarter to make it a four-point game.

Despite the duo of Gerald Green and Josh McRoberts not playing, Spoelstra made an effort to tamp down any concern about their status:

“It’s not an indictment of them,” Spoelstra said. “They’ll be right back in there.”

The Heat will be back in action at home on Tuesday night when they host the Chicago Bulls with tipoff set for just after 7:30 pm ET.
[xyz-ihs snippet=”Responsive-Ad”]