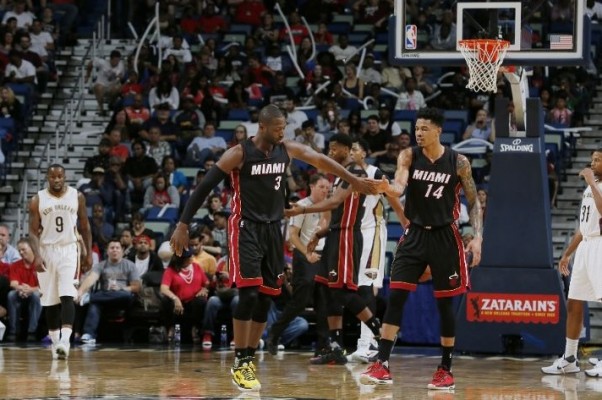 (New Orleans, LA) – Offensive woes down the stretch proved to be fatal to the Miami Heat as they closed out their preseason on the short end of a 93-90 road loss against the New Orleans Pelicans at the Smoothie King Center on Friday night.

Gerald Green again led Miami in scoring on the night with 24 points, followed by Chris Bosh with 19. Hassan Whiteside collected a double-double with 10 points and 12 rebounds, while Dwyane Wade was the only other Heat player in double figures with 11 on the night. The loss gave the Heat a 4-3 final record for the exhibition portion of their schedule, with head coach Erik Spoelstra excited about what Green can offer the team:

“It’s been enjoyable to watch it so far,” said Spoelstra when asked about Green’s play during the preseason.

New Orleans held an 87-83 lead before Tyler Johnson sliced that deficit in half for Miami on a layup with 1:32 left. However, New Orleans was spotless from the line with six straight free throws, the last two coming with 2.8 seconds left, shortly after Mario Chalmers’ miraculous one-footed three from the left corner made it 91-90 in favor of the Pelicans. Johnson’s three-point bid then came up short at the buzzer.

The Heat had appeared to take control of the game by running off the first eight points of the fourth period to hold a 73-68 advantage. They maintained that five-point lead at the midway point after a Bosh jumper, but the Pelicans put together 19-10 run over the next eight minutes to take the 87-83 advantage.

Early on, the Heat held the edge for the majority of the first quarter, though their biggest lead during the first 10 minutes of action was only five at 12-7. Then, in the closing moments, Miami changed an 18-17 deficit into a 23-19 lead, the final points coming on a Green shot at the buzzer.

That energy continued for the first few moments of the second quarter, with the Heat piecing together a 12-3 run to boost their lead to 13 at 35-22. However, Eric Gordon led a surge by the Pelicans, connecting on a trio of three-pointers, the last tying the game at 39 with 6:33 left before intermission.

Miami reasserted themselves by maintaining the advantage for the rest of the quarter, with Whiteside beginning and ending the push that saw the Heat walk off with a 54-48 halftime advantage. Whiteside dropped in a hook shot, then added a pair of free throws before tipping in a Wade layup attempt with 43.9 seconds remaining.

Gordon’s flurry of threes was in direct contrast to his first half performance, since he only connected on one of his other 11 field attempts during the half. That performance helps explain how New Orleans only managed to hit 34 percent of their outside shots.

Spoelstra held out Goran Dragic and Luol Deng, with Dragic not even making the trip. However, despite the loss, he was happy with the way that training camp progressed:

Miami now gets set to make their final cuts and get ready for their season opener, which will take place at the American Airlines Arena on Wednesday against the Charlotte Hornets. Tip-off will begin shortly after 7:30 p.m. ET.
[xyz-ihs snippet=”Responsive-Ad”]