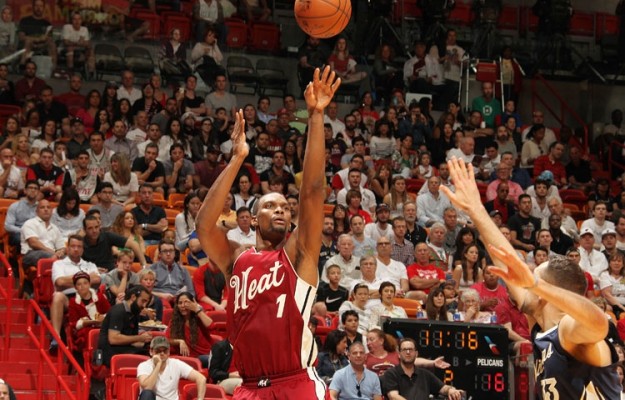 Chris Bosh led all players in scoring with 30 points and 10 rebounds, while Dwyane Wade aided in the scoring attack with 19 points, six rebounds and four assists.

For the most part, the Heat dominated this Christmas Day affair and led for the entirety of the game until late in the fourth quarter. After leading early in the quarter 65-52, Miami blew a 13-point lead as the Pelicans charged back. Ryan Anderson’s tip-in off an Anthony Davis miss gave New Orleans their first lead at 74-72 with 1:45 left.

Following an exchange of buckets which culminated in a tied score of 78-all after a Tyreke Evans layup with 35 seconds left, the Heat had a chance to win the game.

While positioned in the paint, Bosh had the opportunity to seal the win for Miami with a turnaround jump shot. Unfortunately for the Heat, Bosh’s shot attempt was an airball with 14.8 seconds remaining.

With the Pelicans having an opportunity of their own to win their third consecutive game, Anthony Davis came up short on a pull-up jump shot as time expired, sending the game into overtime.

In a similar theme to the majority of the game, the Heat dominated the Pelicans in overtime. After Bosh converted on a free throw with 40.7 seconds remaining, Miami led 90-82, outscoring New Orleans 12-4 during overtime in the process.

Though they seemed dead in the water, the Pelicans stormed back to cut the deficit to 92-88 following an Eric Gordon four-point play with 31.1 seconds left.

That would be as close as New Orleans would get after two Wade free throws and a Gordon missed layup attempt sealed the game for Miami.

Following his 30-point performance, Bosh commented on his key to success in the win:

“Just being aggressive. The past couple of weeks my teammates have really given me urgency. Especially coming out and playing Anthony Davis I haven’t had this opportunity in a very long time so I need this right now.”

The 22-year-old Davis had a sensational game for the Pelicans, notching a double-double by halftime with 20 points and 10 rebounds. The Pelicans center ended the game with 29 points, 15 rebounds, four assists, four steals and three blocks overall. Anderson complimented the scoring attack with 18 points and eight rebounds, while Gordon contributed 16 points on 5-for-15 shooting.

Bosh commented on what it was like being matched up with one of the top overall players in the league today in Davis:

“He’s the best. It’s given me inspiration to really work on my game, put those extra hours in the gym and really step up in big moments and I felt today was a huge game for us to get back on track and I’m glad we came up big.”

Point guard Goran Dragic made his return after injuring his left hand in the team’s previous game versus the Detroit Pistons on Tuesday. He started the game and had seven points and six assists on 3-of-8 from the field in 40 minutes.

The Heat’s victory over the Pelicans moved their all-time record on Christmas Day to 10-2, the best mark of any NBA team.

Miami will travel to Orlando to play the Magic at Amway Center on Saturday night at 7 PM EST. The game will be broadcast locally on Sun Sports.
[xyz-ihs snippet=”Responsive-Ad”]