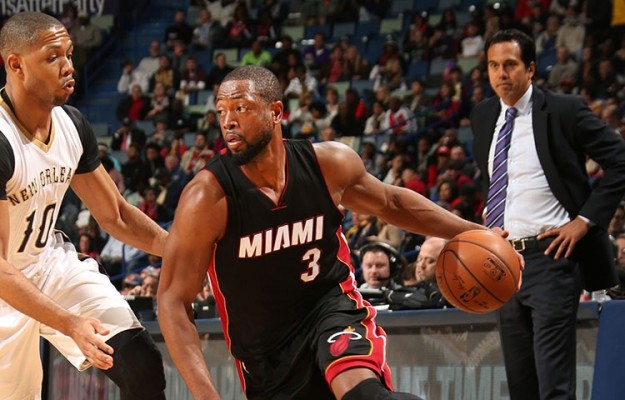 (New Orleans, LA) – In the midst of a rat race for the final two playoff seeds in the Eastern Conference, the Miami Heat (25-32) took a step backwards as they couldn’t hold off the New Orleans Pelicans (31-27) in a 104-102 loss at the Smoothie King Center on Friday night.

Dwyane Wade, who scored 11 points (four of 16 from the field) with his eight assists and four rebounds on the night, missed a potential game-winning three pointer as time expired in the fourth quarter.

“We have to move on from this as quickly as we can,” said a disappointed Miami Heat head coach Erik Spoelstra after the game.

For the first time all season, the Heat lost a game in which Luol Deng had a solid game. In his 22-point effort (seven of 11 from the field and seven of eight from the free-throw line), Miami fell to 9-1 during the 2014-2015 season when Deng scores over 20 points in a game. A strong game by Hassan Whiteside was also not enough to get a victory, despite his 16 points, seven rebounds and four blocked shots.

After they were up by as many as 10 points in the closing minute of the third quarter, the Heat eventually squandered the lead to the Pelicans and an unlikely standout: center Alexis Ajinca.

The 26-year old out of France stole the show for New Orleans, as he scored a career-high 24 points (nine of 10 from the field and six of eight from the charity stripe) to go along with his eight rebounds and three blocks. Most importantly, he made the go-ahead layup with 26 seconds left to lift the Pelicans to their fourth victory in a row.

“It feels great. It feels even better when you win,” said Ajinca on his career night. “This was a big win. I’m very happy that it happened tonight. Hopefully it can keep going that way, so I can help my team a little bit more.”

Down considerably in the frontcourt due to the absences of All-Star power forward Anthony Davis (sprained right shoulder), three-point specialist Ryan Anderson (sprained right knee) and starting point guard Jrue Holiday (right leg injury), the Pelicans found a way to rally past the Heat in a back-and-forth contest.

Guards Eric Gordon, Tyreke Evans and Quincy Pondexter all stepped up immensely en route to 20, 19 and 18 points respectively on the evening. Evans and Gordon were also excellent in their distribution of the ball, as they dished out 11 and eight assists respectively of New Orleans’ 26 total. In place of Davis in the starting lineup, power forward Dante Cunningham recorded a double-double with 10 points and 10 rebounds.

“It means a lot. We finally know what it takes,” said Gordon after his team’s win. “It’s been fun, with everybody paying attention to detail and playing hard with each other. Whoever falls, we have enough talent to still win games.”

Goran Dragic, who played in his fourth game for the Heat since being traded over from the Phoenix Suns on February 19th, propelled his way to another 20-point performance (nine of 13 shots made) and five assists. Strangely, all nine of his baskets made were by layups right under the basket, six of which came in the first quarter alone.

In his first game in the NBA since last season’s NBA Finals, Michael Beasley took advantage of the limited time given to him as he scored seven points in only 10 minutes of action off the bench. His college teammate at Kansas State University, Henry Walker, added 16 points off the bench with four three pointers made.

Up next on their schedule, the current seventh-seeded Heat will return home to American Airlines Arena to take on the Eastern Conference’s top-seeded Atlanta Hawks (46-12) on Saturday night. The game is expected to tip off shortly after 7:30 pm ET.
[xyz-ihs snippet=”Responsive-ImagenText”]