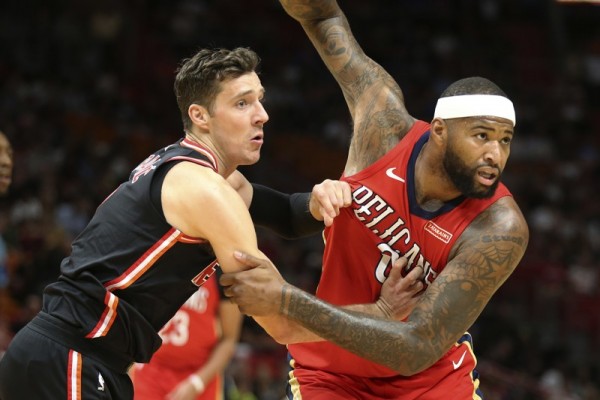 (Miami, FL) – Despite missing several key players to injury, the Miami Heat have enjoyed quite a bit of success as of late. Heading into its game against the New Orleans Pelicans, Miami had won six of its last eight contests. Saturday night’s contest did not reflect the Heat’s recent victories, though, as they let up a crucial third-quarter run and went on to lose in a near blowout, 109-94.

“It wasn’t for a lack of our guys wanting or even putting in the effort. It just wasn’t one of our better nights,” Heat head coach Erik Spoelstra said following the game. “You have to credit New Orleans for that. I actually felt pretty good when it was 68-64. I thought if we could slow the tempo down just a little bit, play this game a little bit more in the mud, that we’d give ourselves a chance there at the end. Then they went on an 11-0 run just like that. Three threes and [Rajon] Rondo’s layup, and they never looked back.”

The game started out promising enough for the Heat as they claimed an early lead, 14-12. Both teams traded shots for the rest of the period, but when Anthony Davis hit two free throws with just three seconds left in the quarter, it looked like Pelicans were going to go into the second frame with the lead. James Johnson, who made his return after missing the last three games, ended the first quarter with an exclamation point, however, when he hit a three-point shot with under a second left in the quarter to secure the lead for the Heat, 28-27.

The second quarter was a battle as well and while the Pelicans outscored the Heat 29-25 in the quarter, both teams headed into the locker room feeling pretty good about their chances to take home the victory.

That all changed in the third quarter.

The game was still close early in the third period as the Heat traded shots with the Pelicans to try and gain the upper hand. When Tyler Johnson, who finished the game with 20 points on 7-of-12 shooting, hit a three-point shot with 9:26 left in the quarter, Miami was down just one point, 61-60, and looked to be on the verge of reclaiming the lead. That one-point deficit was the closest Miami would be to retaking the lead for the rest of the game.

All of the Pelicans starters played solidly throughout the night, but a third-quarter run that ended up deciding the game’s outcome was jumpstarted by bench player Ian Clark, who had 19 points in just 23 minutes of play. Clark began the run when he hit a 3-pointer with 5:44 left in the third period. Less than 40 seconds later, Clark hit another three-point shot, and 30 seconds after that, Anthony Davis helped pile it on with a three of his own. Rondo contributed to the run on their next offensive possession when he converted a pass from DeMarcus Cousins into a skillful layup.

In what seemed like the blink of an eye, the Heat were looking at a 15-point deficit at 79-64. While they were able to clamp down defensively for the rest of the quarter, allowing just five points in the final four minutes, Miami’s shooters simply could not get it going. The Heat were outscored, 27-16, in the third period and while there was whole frame left to play, it quickly became clear that the outcome of the game had been decided.

The Heat celebrated the returns of both James Johnson and Goran Dragic on Saturday night. After missing the three previous games, Dragic returned to help the Heat offensively with 13 points, four rebounds, and two assists in the game.

The players Miami had relied upon in their absence, however, failed to make much of an impact. Josh Richardson had averaged 24.2 points in his previous four games, but in Saturday’s game he had just 12 points on 5-of-14 shooting. Wayne Ellington, who has been on a hot streak from beyond the arc struggled mightily as well and finished game with 13 points on 3-of-10 from three-point range. Bam Adebayo, who has played incredibly well as of late added nine points and seven rebounds in the game, but he was tested mightily against the Pelicans’ two All-Star big men.

“AD (Davis) likes to face up, and Boog (Cousins), he backs down on certain people. Just knowing your matchup and watching it on film,” Adebayo said of the challenges that come with facing off against two of the NBA’s most versatile bigs before commenting on whether or not he felt he did a good job in the game. “I feel like I did. I feel like I could have did better on certain stuff, but you take away from it. The information is in the head and you can move on.”

As a team, the Heat shot just 42.4 percent from the field. The Pelicans on the other hand shot 53.4 percent from the field and an astounding 60.0 percent from beyond the arc. With those kind of numbers it’s no surprise that the Heat went on to lose the game. Still, it is disappointing to see Miami’s struggles at American Airlines Arena continue. So far this season Miami has managed just a 7-7 record while playing in front of their home crowd.

With the loss the Heat move back into the second place in the Southeast Division behind the Washington Wizards.
[xyz-ihs snippet=”HN-300×250-TextnImage”]