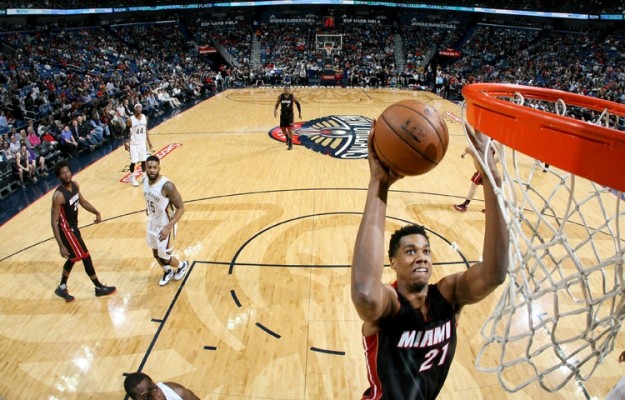 (New Orleans, LA) — Despite being without six rotational players, including superstar Anthony Davis, the depleted New Orleans Pelicans (26-44) gave the Miami Heat (41-29) a more troubling battle than they could have anticipated.

Leading by as many as 22 points in the third quarter the Heat dominated the game for the most part, but a 13-0 run by the Pelicans midway through the fourth brought them to within five. Refusing to allow the home team to snatch a victory, Dwyane Wade and Hassan Whiteside scored 14 of the Heat’s final 16 points to complete a 113-99 victory on the road.

Wade, who joined the 20,000 point club Saturday, led the Heat with 25 points and seven rebounds. Whiteside provided a big spark too, with 24 points, 14 rebounds and three blocks. The talented center played a big part in thwarting New Orleans’ zone strategy, which got them back in the game.

“Him (Whiteside) finding open gaps in the middle of the paint, moving the ball around, collapsing the defense and throwing it in there,” Erik Spoelstra said of Whiteside’s great response to the zone. “When they (Pelicans) started going on a run he stepped up his efforts there. That’s what we want: guarding the rim, protecting on all those pick-and-rolls, being active, jumping, getting off the floor, using his full size, his athleticism, verticality, all of that. We want opponents to feel his presence.”

Whiteside had no problem making the Pelicans feel his presence. Having double-doubled in 15 of the team’s last 16 games, the 7-footer forced the Pelicans to fight hard to score in the paint and provided a strong offensive outing (10-of-11), his best shooting game (.90) since the All-Star break.

From the beginning of the game, the Heat planted an extensive lead with help all over the team. Starting center Amar’e Stoudemire was a large catalyst of that as the 33-year-old posted a season-high 16 points, nine rebounds and two blocks in just 15 minutes. Goran Dragic continued his strong play with 21 points, eight rebounds and five assists and Joe Johnson contributed as well with eight points, a team-high six assists and five rebounds.

While the Heat are heading towards the playoffs, the injury-ravaged Pelicans are going in the complete opposite direction. The Pelicans, who are without Davis, Tyreke Evans, Ryan Anderson, Eric Gordon, Norris Cole and Quincy Pondexter, put up just as much a fight as they could and showed heart after a series of Heat blows.

The Heat will continue their two-game trip tomorrow in San Antonio, where the Spurs have gone 35-0.

Whiteside spoke on the immense challenge and the history they could make:

“It’s going to take a lot of effort. We just got to come out here and compete. Just make it tough and play Miami Heat basketball and get that win … Let’s go.”