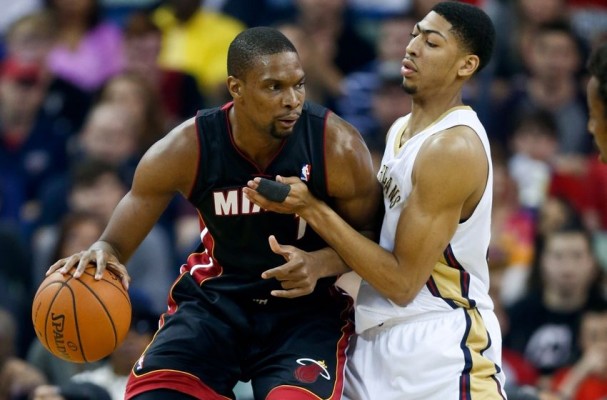 (Miami, FL) — The Miami Heat are looking for the gift of victory on Christmas Day in their bout with the New Orleans Pelicans on Friday afternoon. After dropping a nail-biter earlier in the week at home against the Detroit Pistons, the Heat look to bounce back in a big way.

While Anthony Davis and the Pelicans will be playing their first ever Christmas Day game, the Heat have been an NBA staple in regards to holiday matchups. Miami is 9-2, with a six-game win streak, in games played on December 25th.

Dwayne Wade spoke to the media about playing on Christmas after Thursday’s practice:

“You just always remember that Christmas Day is a special day for families to get together and do whatever it is they’re going to do, but sports are huge on it. Just like Thanksgiving; football is big on Thanksgiving and basketball is big on Christmas.”

Reporters then shifted to Hassan Whiteside to hear his thoughts on the state of the team:

As the team continues to gel, a glaring weakness is surfacing; one that they look to shore up by Friday. The Heat have a painful inability to make and defend the three ball. Miami got burned from beyond the arc on Tuesday and blew an early 18-point lead because of it. Conversely, they shot only 4-of-18 from three themselves. They currently rank 25th in three-point shooting.

“We’ll regroup, learn from it and keep plugging away,” head coach Erik Spoelstra said after the loss.

The Heat could sure use a win to secure some breathing room in the standings. The Eastern Conference is currently a toss-up, with the two and eight spots separated by a mere 1.5 games. The Heat currently hold the fourth spot and are three and a half games behind LeBron James and the Cleveland Cavaliers.

On the other hand, the Pelicans look to make up some ground in the always competitive West. After starting the season 1-11, New Orleans is 8-8 in their last 16 games.

The Pelicans swept their season series with Miami last season, and won their preseason bout with the Heat in October. Miami looks to end that streak but will be without Josh McRoberts and are looking at game-time decisions for guards Goran Dragic and Tyler Johnson.

Regardless of his playing status, Tyler Johnson has something special in store for the Christmas Day matchup. Johnson and the Heat organization will be honoring his mother, Jennifer Johnson, for her 14 years of service in the U.S. Air Force.

“It’s going to be awesome,” Johnson said after going through Thursday’s practice. “It’s kind of similar to the first game I played in Golden State, when she actually got to do the color guard. So it’s cool.”

As for Dragic, if he can’t go, Beno Udrih will likely get the start. He did a solid job filling in at point guard on Tuesday versus Detroit, tallying 14 points and six assists.