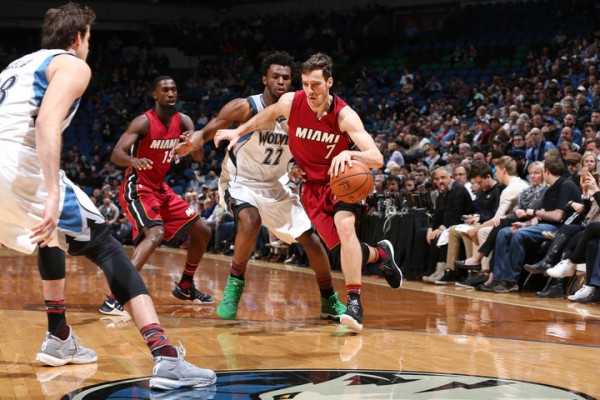 (Minneapolis, MN) – In a thrilling contest that came down to the final possession, the Miami Heat (22-30) managed to hold off and beat the Minnesota Timberwolves (19-33) by a score of 115-113 at Target Center on Monday night for their 11th straight victory.

After Heat rising star center Hassan Whiteside (19 points, 13 rebounds and two assists in 36 minutes of action) had hit 1-of-2 free throws with just eight seconds left in the fourth quarter, Wolves forward Andrew Wiggins missed a 15-foot jumper as time expired that would have forced overtime.

“We’re locked in,” Whiteside said after his team’s victory. “We have so many close games. Mentally, it was tough. We came in with a mental toughness and got the win.”

In a span where he is playing the best basketball of his career, point guard Goran Dragic led the way for Miami with a sensational 33-point (13-of-17 from the field, including 7-of-9 from behind the arc), nine-assist performance.

“The first four threes were wide open threes, so I didn’t have to work hard for those shots,” Dragic said immediately after the game. “But all credit goes to my team, they were finding me.”

Dragic, who made his first seven 3-pointers on the night, admired his team’s ability to hold on for another gritty victory on the road.

“We’re starting to understand each other and how we need to play as a team. I feel like everybody’s sharing the ball, everybody’s working towards the same goals,” Dragic said. “Nobody’s selfish on this team. Everybody’s putting themselves into the team.”

It was not an easy victory for the Heat by any means, despite leading 71-57 at halftime and possessing a seven-point lead with just under 40 seconds left in the final frame. Costly turnovers plagued the Heat down the stretch, as they turned the ball over 17 times as a team for the game, but they played good enough defense to pull within just two games of the Detroit Pistons (24-28) for the 8th seed in the Eastern Conference.

“We actually came into the game expecting the final furious competition at the end,” Heat head coach Erik Spoelstra said during his postgame press conference. “That’s what we expected. You have two teams that are very tough-minded, that their records don’t necessarily show how tough of games they’ve played. So we were expecting a dogfight coming into it.”

For the Wolves, in a losing effort, star center Karl-Anthony Towns and Wiggins were a great one-two punch throughout the game. Towns finished with a game-high 35 points (13-of-20 shooting) and eight rebounds, while Wiggins had 27 points (11-of-23 shooting) to go along with four rebounds and two steals.

“We made shots, had good offense and had good ball movement, but we need to get stops to win,” Wiggins said.

Wolves point guard Ricky Rubio had himself a double-double effort with 14 points and a game-high 13 assists, while power forward Gorgui Dieng and small forward Shabazz Muhammad had 13 and 12 points respectively for Minnesota.

In search of an unfathomable 12th straight win, the Heat will play their second contest of a four-game road trip on Wednesday night as they take on the Milwaukee Bucks (22-28) at BMO Harris Bradley Center. The contest, which is scheduled to tip off shortly after 8:00 p.m. ET, will be broadcast live locally on Fox Sports Sun.
[xyz-ihs snippet=”Responsive-ImagenText”]