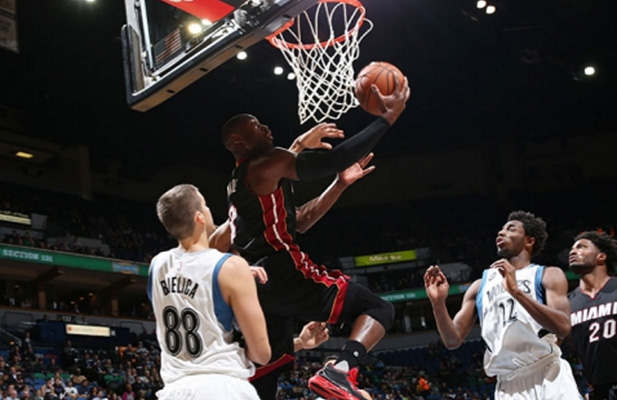 (Minneapolis, MN) — The Miami Heat (3-2) easily defeated the Minnesota Timberwolves (2-2) by a score of 96-82 at the Target Center on Thursday night.

The victory marks the first win for the Heat on the road this season. Dwyane Wade led all scorers with 25 points on 11-of-19 from the field, including a half-court heave with time expiring in the first half that gave Miami a 49-39 lead entering halftime. All five Heat starters scored in double digits by the end of the third quarter.

Goran Dragic notched 18 points while Chris Bosh had 16 points and 12 rebounds in the win. Both Kevin Martin and Shabazz Muhammad led the Timberwolves with 14 points apiece as Minnesota struggled offensively all night.

While the Heat were consistent with thier scoring, it was the defense that was the key to victory. Miami held Minnesota to just 35.3 percent shooting (30-85) from the field, a season-low for a Heat opponent this season.

From the 4:15 mark of the second quarter until the end of the game, the Heat never trailed. It may have been the most complete game played by the team this season, as Miami led by as many as 21 points.

Wade is averaging 22.5 points on 49.3 percent shooting from the field through the first five games of the year. The veteran guard spoke of his strong start offensively following the game:

The Heat depended heavily upon its starters—81 of the 96 points scored were by the starting five. In fact, Minnesota’s bench outscored Miami’s bench 55-15 for the game.

Despite the huge disparity in bench play, the starters set the tone from start to finish as head coach Erik Spoelstra was pleased with his starting five’s play:

“Those guys stepped up big and they did it defensively, committing to that type of effort and physicality. They were in their own rhythm in the context of our offense.”

Hassan Whiteside continued his strong start to the season as he posted 12 points with nine boards and four blocks in 30 minutes of action. While he outplayed opposing rookie center Karl-Anthony Towns—who scored just six points and grabbed four rebounds—he did have seven turnovers in the game.

Next up for the Heat is a trip to Conseco Fieldhouse to play the Indiana Pacers (2-3) on the road on Friday night. The Pacers were a playoff nemesis of Miami, having played the Heat in three consecutive postseasons from 2012 until 2014.

Bosh, who played a key role on each of those teams, commented on the upcoming matchup with Indiana:

“We know they’re trying to play fast but it’s going to be a defensive game. With the new style of play that they’re running with Monta and Paul George at the four we know that they want to play a little bit faster. We’re going to have to focus on getting back on defense, making sure we’re stacked up in the paint, clogging it up and not giving Monta easy buckets.”

Tipoff is set for 8:00 EST and the game will be broadcast on Sun Sports.
[xyz-ihs snippet=”Responsive-Ad”]