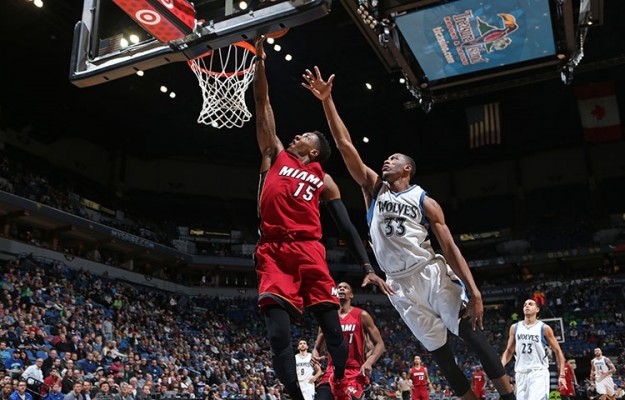 (Minneapolis, MN) — With just 50 seconds left on the game clock, the Miami Heat ran a designed play for Chris Bosh, who hit a clutch jumper at the top of the key to put the Heat up 101-100.

That’s when all hell broke loose.

It started with a set play for Kevin Martin, who hit a tough floating jump shot to put the Minnesota Timberwolves up 102-101 with just 40 seconds left to play. On the ensuing possession, Norris Cole inbounded the ball to Hassan Whiteside, but for whatever reason, instructed Whiteside to go back out of bounds to inbound the ball again, resulting in a costly turnover.

The Heat had another chance on the final possession of the game, but Mario Chalmers missed a wide open running layup, followed by a missed three pointer from Cole as the horn sounded.

All words that could have described the brutal finish to the game on Wednesday night.

“Hell yeah, it’s a missed opportunity,” said Bosh, who had 14 points on 5-for-14 shooting. “We’re not going to get it back. That’s one thing about this league: If you’re in a situation where you can’t really afford to lose any games, things are slipping away from us.”

The Heat, who played their fourth straight game without superstar Dwyane Wade, are now the eighth seed in the East and lead the Brooklyn Nets by just half a game.

“We need to understand how hard we have to play to win on the road with [Dwyane Wade] not with us,” said Heat head coach Erik Spoelstra.

Miami held a 10-point lead with just over nine minutes remaining in the fourth quarter, but once again, somehow managed to let the game slip away.

The loss spoiled a career night from Whiteside, who finished with the first 20-20 game of his career, as he finished the night with 24 points and 20 rebounds. The 24 points was also a season high for Whiteside, who scored in double figures for his seventh consecutive game.

Wolves forward Thaddeus Young, who ended the night with 16 points and five steals praised Whiteside’s rebounding ability after the game.

Aside from Whiteside, Miami received a much better contribution from their starting backcourt as Shabazz Napier and Chalmers combined for 18 points and 12 assists on the night, a much better output than their previously combined one-point scoring dud the night prior.

The Heat received a huge scare in the first quarter when Chalmers had to be helped off the court as he slammed into a chair on the sidelines. Luckily, x-rays were negative, and he was able to return to the game.