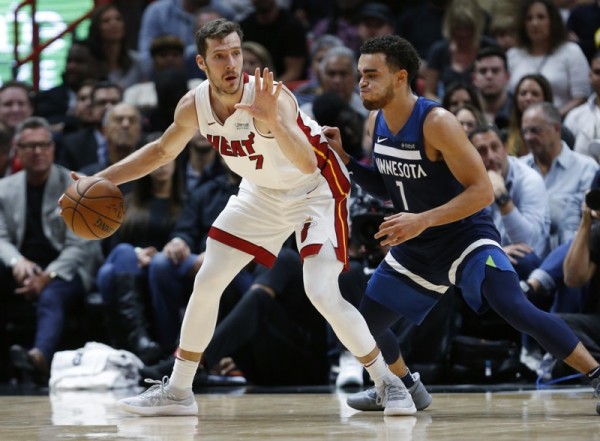 (Miami, FL) — Despite Dion Waiters‘ 18 points during the final three minutes of regulation and overtime, the Miami Heat suffered a 125-122 defeat to the Minnesota Timberwolves at American Airlines Arena on Monday night. The loss drops the Heat’s season record at 2-4 and marks their third consecutive loss.

With 3:09 left in regulation, the Timberwolves had held a 104-97 lead and seemed ready to put the game away. However, six points from Waiters, a pair of turnovers by the Wolves and a pair of free throws from Kelly Olynyk with 1:14 left were part of an 8-2 surge by the Heat that sliced the deficit to just a single point at 106-105.

Waiters then split a pair of free throws, before Andrew Wiggins delivered a dunk that boosted the Wolves’ lead to 110-106 with 38.6 seconds left. Two free throws by Waiters, a missed attempt by Minnesota and another basket by Waiters with just 3.6 seconds remaining pushed the game into overtime.

However, Minnesota dominated much of the extra session, scoring the first six points and forcing four turnovers during the first four minutes. With a minute remaining, the Timberwolves had held a seven-point lead, but a basket by Tyler Johnson, a steal by Goran Dragic and 3-pointer by Olynyk, all in the span of just six seconds, made it a two-point contest with 49.4 seconds left.

Soon after, a late four-point lead by the Wolves was sliced to one by Waiters, after he drilled a three-pointer with 5.4 seconds remaining. Minnesota’s Jeff Teague then hit two free throws a second later to give his team a 125-122 lead, with Waiters’ three-point attempt at the buzzer missing to end the thriller.

Waiters collected a game-high 33 points on the night, one of six Heat players to score in double figures, and also added five rebounds, four assists and three steals. Olynyk came off the bench for 23 points and six boards, while Dragic contributed 18 points, six rebounds and five assists. Johnson chipped in with 12 points, while Justise Winslow came close to a double-double with 10 points and eight rebounds.

“He’s really been working at it behind the scenes,” Heat head coach Erik Spoelstra said about Waiters. “He was able to be aggressive tonight and was able to get his first step tonight.”

One player who did reach double-double territory for Miami was Bam Adebayo, who again played in place of the injured Hassan Whiteside. The rookie managed to put up Whiteside-like numbers with 13 points and 13 rebounds, including 10 boards on the offensive side of the glass.

“It was good to see,” Spoelstra said of Adebayo. “He’s been doing this in practice. He’s been extremely consistent with his approach.”

Adebayo himself spoke of the team’s more aggressive approach on the night.

“We were playing with a lot of intensity, we were playing and hard and playing together,” Adebayo said. “We got one percent better tonight, but we came up short.”

Two areas that Spoelstra was disappointed in were the 24 Heat turnovers and 35 free-throw attempts the Wolves shot.

“It’s been three games where the possession game has hurt us,” Spoelstra said. “It’s tough to give up that many in the turnover game and at the free-throw line.”

Early action saw the Timberwolves miss 10 of their first 12 shots and fail to make their first field goal until nearly five minutes of action had been completed. In contrast, the Heat were able to hit for 59 percent from the field throughout the first half and held multiple 10-point leads during the first quarter. By the time the opening quarter had ended, Miami held a 32-23 advantage.

Following that frigid start, the Timberwolves’ shooting touch improved considerably, connecting on 21-of-32 (65.6 percent) for the remainder of the first half, while also dishing out eight assists and forcing five turnovers during the second quarter.

However, their comeback didn’t truly begin until the second period, when they ran off 12 unanswered points in a span of just three minutes to deadlock the game at 55-apiece. The last of those points came on a thundering alley-oop dunk by Karl-Anthony Towns. Minnesota then took their first lead of the game in the closing moments and appeared headed to intermission ahead on the scoreboard. However, Dragic’s 3-pointer from the top of the key instead gave Miami the 62-60 lead.

The Heat managed to hold the Timberwolves to just 29 percent shooting from the field during the third quarter. However, Miami’s self-inflicted wounds, most notably the eight turnovers during the period kept the game close. Running off the last seven points of the quarter to take an 82-79 lead into the final period was a positive sign for the Heat in comparison to the third-quarter woes they’ve battled in recent contests.

“Our activity was much better,” Spoelstra said. “You could feel our presence defensively.”

The Heat will once again be at home for their next matchup, which will take place on Wednesday night when the Chicago Bulls come to American Airlines Arena. That game that will tip off just after 7:30 p.m. ET.
[xyz-ihs snippet=”HN-300×250-TextnImage”]