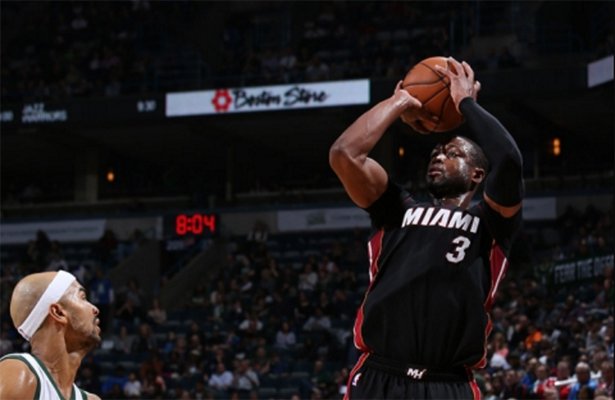 (Milwaukee, WI) — An errant elbow by Amar’e Stoudemire followed by a retaliatory shove from Bucks forward Giannis Antetokounmpo, just 30 seconds after tipoff, kicked things off between these two Eastern Conference foes. The Milwaukee Bucks (27-38) showed no signs of fear as they took it to the Miami Heat (37-27) in this one, winning 114-108.

The Bucks’ youth, length and athleticism seemed to pose problems from the start for the older Heat team. Joe Johnson struggled as he drew the assignment of guarding the bigger, stronger Antetokounmpo, Stoudemire notched two early fouls and Miami was struggling just to keep up.

“We just didn’t bring enough from a competitive, defensive standpoint,” said Heat head coach Erik Spoelstra after the game. “We had pockets of the game where we competed, we did things the way we’re capable of. That’s a unique basketball team (the Bucks) in their ability to attack and get to the paint.”

Things changed once Hassan Whiteside entered the game late in the first quarter. The Heat big man matched the Bucks’ length and athleticism with size and strength as he dominated down low. His 19 first-half points helped Miami overcome an early 10-point deficit as they entered the break down just 57-54.

Spoelstra praised Whiteside’s efforts after the game but recognized that they weren’t enough for the win:

“He had some minutes where he helped us in the paint very well, but we just have to keep on moving forward. This was not one of our better games.”

Heat forward Luol Deng was the difference maker in the third quarter. He scored 11 points on 5-of-6 shooting in the period and helped Miami take a five-point lead heading into the final quarter. From there, it was an all out battle of well-balanced basketball.

Halfway through the fourth, the Bucks regained the momentum and took the lead. With 6:07 remaining, the Heat called a timeout after they fell down 97-92. Unfortunately for Miami, it was too little, too late, as Milwaukee eventually pulled away. The Bucks now lead the season series with the Heat, two games to one.

After the game, Dwyane Wade spoke to the media about the tough matchup:

“They beat us in second chance (points) and they beat us at the line. We had too many turnovers as a team, I had way too many.”

Antetokounmpo led all scorers with 24 and Jabari Parker chipped in with 23. Whiteside led all Heat scorers with 23 and reached double figures in rebounds off the bench for a 10th consecutive game, a Heat record for a reserve, and the first time an NBA player has done that since Dennis Rodman did it in the 1993-94 season.

“I’m just here to play. Whatever he (Spoelstra) says, I just go out there and try to do to the best of my abilities. I try to rebound, block shots and dunk on people. I just try to be the best Hassan Whiteside I can be on the court.”

Deng added 20 points for Miami and Wade finished with 18, though he struggled from the field. The Heat must now head to Chicago for a Friday night matchup with the Bulls.
[xyz-ihs snippet=”Responsive-Ad”]