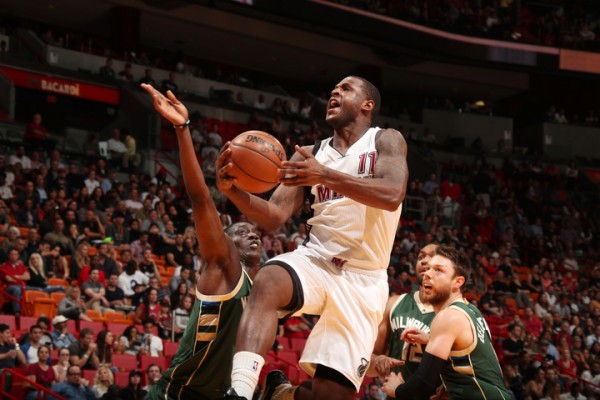 (Miami, FL) — The backcourt duo of Goran Dragic and Dion Waiters combined to score 58 points on 32 shots to lead the Miami Heat (13-30) to a 109-97 victory over the Milwaukee Bucks (20-22) on Saturday night en route to their first three-game winning streak this season.

“Our backcourt was relentless tonight,” said Heat head coach Erik Spoelstra after the game. “They generated a lot of solid offense for us and found ways to get two feet in the paint quite often.”

Waiters scored 20 of his career-high 33 points in the first half and was able to slash through the Bucks’ defense and get to the basket all night long. Even though the Heat fell into an early six-point deficit, Waiters was able to turn the momentum in their favor to help eventually build a 10-point halftime lead.

“I’m out here and Coach believed in me. We’ve had great talks and he just wants me to be aggressive. Just doing the little things. I was attacking and I was aggressive tonight,” said Waiters.

The Heat’s lead ballooned up to 14 in the third quarter, but Bucks emerging star forward Giannis Antetokounmpo kept the game close by knocking down timely shots and getting his teammates involved in the action on the offensive end. Antetokounmpo, who was announced as a starter in this year’s All-Star Game earlier this week, showed flashes of brilliance on the court but was not able to sustain his impressive play for long stretches. He ended the evening with 24 points and 10 rebounds.

Meanwhile, Dragic, who has averaged 21.5 points on 51.7 percent shooting in the past eight games, was once again a force to be reckoned with on Saturday. He followed up Thursday’s 32-point performance with another fantastic stat line Saturday.

“Goran has had a career-high year. This is not something that is just happening right now,” said Spoelstra. “Right now he knows he has to be aggressive for us. He has to create offense for us and generate good looks. The more aggressive he is the better our offense is.”

The Slovenian point guard wrecked havoc on the Bucks’ defense all night by pinning his ears back and forcing the Bucks to double team him in the paint. He was able to find his teammates and dished out six assists on the night. To cap it off, Dragic showed up big in the fourth quarter while the Bucks were trying to mount a comeback, scoring eight of his 25 points late in the game.

The Bucks’ porous defense allowed the Heat to establish their offensive presence inside and outside the paint. Miami was extremely efficient shooting the ball as it finished the night shooting 53.2 percent from the floor, while holding Milwaukee to just 41.8 percent shooting.

“(We) are getting more consistent to our identity: defense,” said Spoelstra. “Its heading the right direction defensively.”

Waiters put a final stamp on his best game of the season by hitting two threes (his only two field goals of the fourth quarter) in the last 2:33, shutting the door on any comeback plans by the Bucks.

Joining the Heat’s dynamic backcourt on the scoring front was Hassan Whiteside, who ended the night with 16 points, 15 rebounds and two blocks.

In addition, Wayne Ellington got a chance to play extended minutes due to Tyler Johnson being out with a strained left shoulder. He took advantage of the opportunity to show off his explosive shooting, knocking down three 3-pointers en route to a 15-point night. Ellington also hit his 500th career 3-pointer in the first half.
[xyz-ihs snippet=”Responsive-ImagenText”]