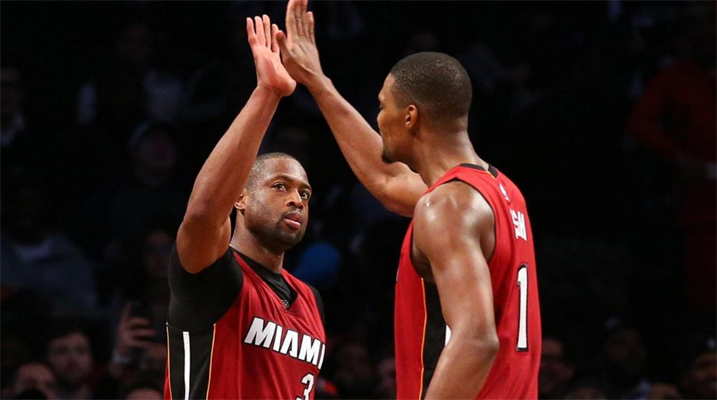 (Milwaukee, WI) — The Miami Heat’s starting unit came out running Friday night and fought hard to the finish as they edged out the Milwaukee Bucks 107-103. Led by Dwyane Wade‘s 24 points and seven assists, the Heat were able to overcome the Bucks for the first time in nearly two years.

It was a total team effort for Miami, who finished with six players in double figures. Wade, however, was the closer. He scored 10 of the Heat’s final 13 points. It was the third game in a row in which Wade notched double digit points in the fourth quarter. The 34-year-old guard spoke of his efforts after game, with a bag of ice on each shoulder:

“You gotta work for everything against this team (Milwaukee). I tried to learn from the last time we played them. I watched a lot of film. I tried to be patient tonight and take what they gave me.”

Miami’s offense looked looked like a well-oiled machine in the first half, due in large part to the return of their starting point guard Goran Dragic, who had missed the previous eight games with a calf injury.

“I felt great out there, I was aggressive, I made some plays.” Dragic said with a smile after the game.

Things got tight in the second half when Milwaukee erased a 12-point deficit to take a two-point lead into the fourth quarter. Miami eventually rallied back to take the lead, but with a minute left in the fourth quarter, Bucks big man Giannis Antetokounmpo hammered in a ferocious dunk to tie the game up at 101. Less then 15 seconds later, Wade silenced the Milwaukee crowd with a dagger that put the Heat up two. The rest was history.

“This is a team we haven’t had much success against, but when they took the lead, we didn’t do anything but come back the next play and run our offense and come out on the defensive end and do our defensive schemes,” Wade told reporters.

Amar’e Stoudemire started at center again, filling in for the ailing Hassan Whiteside. He certainly held his own, as he finished with 12 points, eight rebounds and two blocks in just 24 minutes. More importantly, he set screens and helped Miami move the ball. He’s come on as of late, re-establishing himself as a more offensive-minded player.

“He (Stoudemire) and Dwyane, those guys have been our Benjamin Buttons,” head coach Erik Spoelstra said after the game.

Josh McRoberts also made an appearance Friday night after missing the previous 26 games. He struggled to get much going but finished with a team leading +8 in the plus-minus category. He showed flashes of his value Friday night by helping to move the ball around and establish a flow within the offense.

Miami has now won three straight games after losing their previous four. They look to keep their momentum going against a slew of above .500 teams in the coming weeks, beginning with the Atlanta Hawks in Miami, on Jan. 31st.
[xyz-ihs snippet=”Responsive-Ad”]