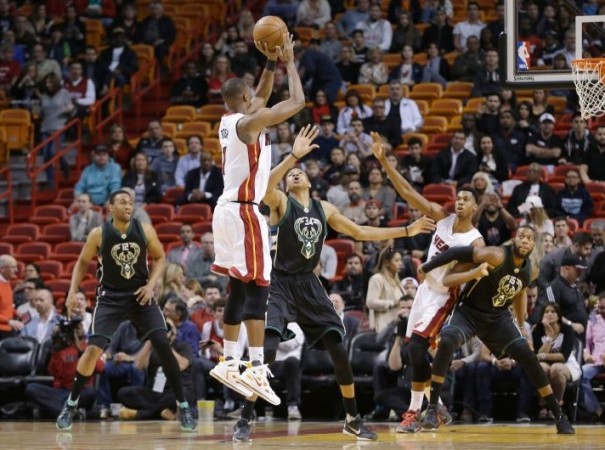 (Miami, FL) – Unable to stop an 18-2 run during a five-minute span of the third quarter made the Miami Heat’s brief homecoming an unhappy one as they fell, 91-79, to the Milwaukee Bucks at American Airlines Arena on Tuesday night.

Miami had cut an early 12-point third quarter Milwaukee lead in just over two minutes to make it 51-45 with 9:46 remaining in the period. However, a Whiteside dunk was the only answer to the Bucks’ 18-2 run, and the Heat soon found themselves trailing 69-47 with 4:44 to play in the quarter.

From that point, Miami was never able to get the margin closer than the final 12-point deficit. The loss drops them to 23-19 on the year, while the Bucks improve to 19-25 for the season.

Shaky shooting throughout the game for the Heat served as the main contributor to the loss, with the squad hitting on just 36.5 percent of their shots. Miami’s starting backcourt of Dwyane Wade and Tyler Johnson endured rough nights, combining for just five points and hitting just one of their 12 combined field goal attempts.

The loss wasted a strong effort by Hassan Whiteside, who finished with 23 points and 18 rebounds. Teammate Chris Bosh matched him in the points category and added five rebounds, while Luol Deng was the only other Heat player to tally double figures with 11 points.

Bosh sought to challenge his teammates with his postgame comments:

“No matter what, we obviously have to work on our mental toughness,” said Bosh. “We’re kind of weak in that area.”

Speaking after the game, Heat head coach Erik Spoelstra refused to blame the team’s injury problems and was focused on looking ahead:

“It was a pretty flat performance,” said Spolestra. “Regardless of what happens, we’re going to come out of this.”

Wade joined Spoelstra in refusing to use the injuries as a reason for the team’s struggles, saying a more cohesive atmosphere was needed:

“We dealt with worse than this last year,” said Wade. “We’ve just got to find a way to play together more.”

Barely home after a six-game road trip, Miami now begins a five-game road swing on Wednesday night against the Washington Wizards. That game is set to tip off just after 7 p.m. ET.
[xyz-ihs snippet=”Responsive-Ad”]