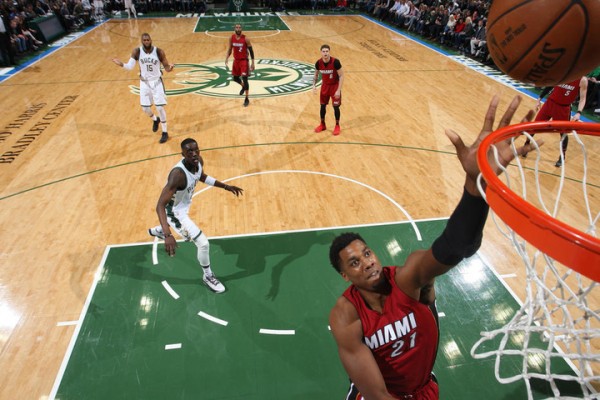 (Milwaukee, WI) — The Miami Heat are the hottest team in the NBA these days, and on Wednesday night, they stayed hot, as they dismantled the Milwaukee Bucks on their home court, 106-88.

The Bucks had lost five of their previous six games heading into the night’s matchup with Miami, so naturally, they were desperate for a win. However, it was Miami who came out as the clear aggressor. In fact, the Heat set the tone for the evening by opening up the game with an impressive 19-4 run.

From there, Miami was able to keep the Bucks at bay all night by dominating on the glass, playing stout half-court defense, and utilizing a well-balanced attack on offense. To the latter point, the Heat once again had five of their players score 10 points or more. Miami actually leads the league in players that average double-digit scoring, and tonight was a prime example of that.

“I think right now there’s just different guys who can lead us,” Heat forward James Johnson said of Miami’s well-rounded offense. “Different guys are capable of having a big night and we just keep on feeding that and feeding that until we exhaust it, and after that, we (still) have more killers on this team.”

“We really (are) just feeding off each other’s energy. I think that’s the most important key to a basketball team — just kind of striving in that category, with energy and effort.”

Speaking of energy, 7-foot big man, Hassan Whiteside, brought it in this one.

“You’ve seen what he’s been doing lately,” McGruder said of Whiteside. “So why not feed the hot hand? That’s what we believe in and Hassan was playing phenomenal tonight.”

Whiteside led the way with 23 points and 16 rebounds, followed by Johnson and Wayne Ellington, who had 20 and 17 points, respectively. The other two double-digit scorers were Goran Dragic, who tallied 16 and McGruder, who added 10 points of his own. Giannis Antetokounmpo led all Bucks scorers with 22 points.

The Heat are now the only team in NBA history with a record below .500 to win 12 straight games. They also just tied the Golden State Warriors for the longest win streak of the 2016-17 season. Still, the Heat aren’t getting ahead of themselves just yet:

“Our mindset is not going to change right now,” Heat head coach Erik Spoelstra told Fox Sports’ Jason Jackson after the win. “It’s not about the wins or the streak or any of that. It’s just about continuing to try and get better and that’s one of the toughest things to do — not only in pro sports but in everyday life, to just focus on that improvement everyday.”

As for Milwaukee, it’s now lost 11 of its last 13 games, but perhaps more concerning is the potential loss of forward Jabari Parker. The former second overall pick went down in the fourth quarter with an apparent knee injury, and he had to be helped off the court by teammates. There is still no word as to the severity of his injury.

Without Parker, the Bucks will try to right the ship on Friday when they host the Los Angeles Lakers. The Heat will also play Friday when they visit Brooklyn to play the Nets. Miami has a good chance to extend their win streak to a baker’s dozen in that one, as the Nets are currently the worst team in the NBA record-wise.
[xyz-ihs snippet=”Responsive-ImagenText”]