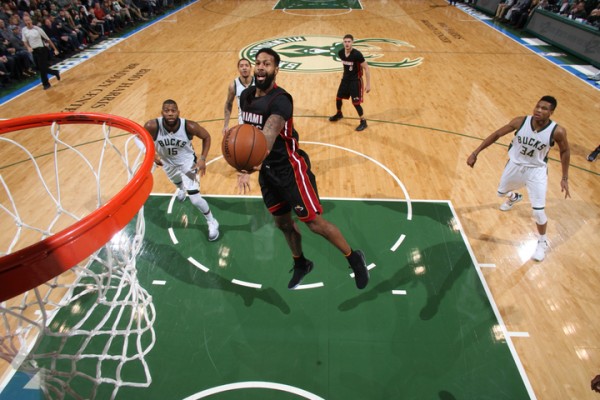 (Milwaukee, WI) — The Miami Heat remain stuck at 11 wins for the season as they fell 116-108 to the Milwaukee Bucks on Friday night. With only 10 healthy players available in the final game of their six-game, West Coast road trip, the Heat could not keep up with the Bucks and fell into a deep hole early and never found a way out.

Milwaukee was a step ahead of Miami right from the tip in Friday night’s matchup. The Heat opened the game with poor defensive rotations and allowed the third-best shooting team in the league get into a good offensive rhythm early on.

Led by their emerging superstar Giannis Antetokounmpo, the Bucks scored their most points in a quarter this season in the first frame (42) and really blew the game open late in the first half. The lanky point forward was crucial in generating easy offense by pushing the pace for Milwaukee on the fast break. Antetokounmpo finished the night with 19 points, six assists and eight rebounds.

The Bucks had built a lead as large as 22 at one point, but the Heat closed the gap slightly to make it a 17-point game at the half. After Miami had allowed Milwaukee to score just 73 points overall in their first meeting this season (a win back on Nov. 17th), the Heat’s dearth of energy and porous defense allowed the Bucks to drop 65 in the first half of Friday night’s matchup.

“The offensive rebounds, the hustle plays  and the transition,” said Heat head coach Erik Spoelstra. “Those are all effort, energy and decisions-with-intent plays and they were beating us to all those effort plays.”

At the start of the fourth quarter, Tyler Johson and James Johnson led the Heat on a 17-8 run to cut the Bucks lead to just eight with seven minutes left in the game. Tyler Johnson ended the night with 14 points, five assists and three steals, while James Johnson contributed 10 points and 12 rebounds. However, the Bucks, led by Jabari Parker, did not let Miami get any closer. Parker took control of the offense down the stretch, ending the game with 24 points including three 3-pointers.

Even though Spoelstra emphasized during Friday’s shootaround that the Heat were not interested in moral victories, they ended up settling for one against the Bucks. Miami’s never-say-die attitude allowed them to claw all the way back and flip a blowout into a somewhat competitive final quarter.

Overall, the Heat were more engaged on the defensive end in the second half, but the Bucks were not going to let an 11-win team pull off a comeback win on their home court. While no one on the Heat roster could get it going on Friday night, the Bucks got contributions from stars and bench players alike. Michael Beasley and Greg Monroe both came off the bench and contributed 11 and 16 points, respectively.

In comparison, the Heat’s usual scorers, Goran Dragic and Hassan Whiteside, were missing in action for most of the night in Milwaukee. Dragic picked up two early fouls and was never able to get involved in the Heat’s offense until the final half of the fourth quarter when the game was out of reach. He ended the night with 19 points and three assists.

Whiteside missed a lot of shots early in the game but hammered home a couple dunks late to bring his total to 19 points on the night. The 7-footer managed to grab just nine rebounds (just his fifth game of the season with less than 10 boards), and as a result the Heat were demolished on the boards by a 46-27 margin.

“We gotta have a better understanding of each other, you know. That’s basically what it comes down to,” said Whiteside. “We are getting better and we’re just going to keep working.”

Even though the Heat play eight of their next 10 games at home, their schedule does not get any easier. They will open a four-game homestand against the high-flying Houston Rockets led by James Harden on Tuesday.

“This group…I love the way they work at it,” Spoelstra said, trying to find the silver lining on a disappointing road trip. “We’ll continue to do that and go home and enjoy some family, friends and nice weather. And get back to work in the gym.”

While the Miami Heat are getting ready to battle the Los Angeles Lakers in the 2020 NBA Finals, they...