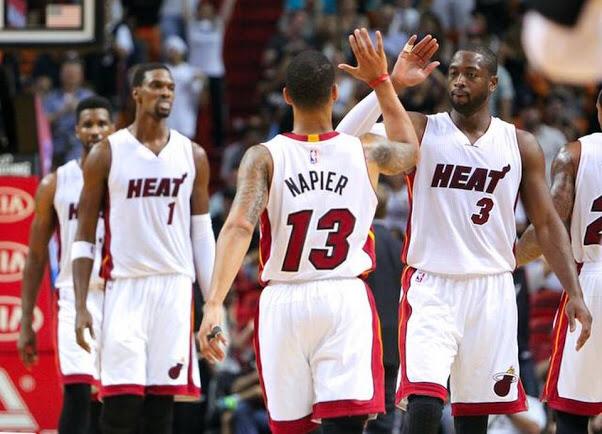 (Memphis, TN) — The Miami Heat are on a roll entering the regular season.

The Heat (4-4) defeated the Memphis Grizzlies (3-5), 104-98, in both teams’ final game of the preseason. It was Miami’s fourth straight victory to close out the exhibition schedule. Chris Bosh led the team with 21 points and six boards on 8-of-14 shooting, while Dwyane Wade was efficient with 7-of-9 shooting and 16 points following a 26-point performance versus the Houston Rockets on Tuesday night.

In a game that was close from the beginning until end, the Heat led the Grizzlies for most of the contest. Wade impressed the most as he started the game 7-of-7 from the field. It wasn’t until there was 1:45 remaining in the first half that ‘Flash’ missed his first attempt from the field.

Miami put out a starting lineup featuring Norris Cole once again at the point guard position, with Wade at the two-guard, James Ennis at small forward, Shawne Williams at power forward and Bosh at center. Ennis started in place of Luol Deng, who missed the game due to a back injury.

Cole perhaps solidified his hold on the starting point position with another superb performance. The fourth-year player notched 14 points with seven assists on 5-of-6 shooting. He did not turn the ball over a single time. His play featured several timely passes to Wade that led in easy baskets for the Heat.

However, Mario Chalmers was no slouch either. ‘Rio scored 11 points off of the bench on 4-of-5 shooting with three assists and just one turnover.

While the Heat excelled as a team in their final outing of the preseason, the biggest storyline entering the game was the battle for the final roster spot between Khem Birch and Andre Dawkins. While Birch received a few minutes of playing time before the start of the fourth quarter, Dawkins was held out of the game until the start of the final period.

Both players played well in their final auditions for coach Erik Spoelstra. Birch was an interior defensive presence, as he swatted three shots, including one that led to an Ennis fastbreak dunk that put the Heat up 99-91 late in the fourth quarter. While Birch excelled defensively and on the glass, Dawkins showed off his offensive skills by scoring nine points in the final 12 minutes of the game.

The Heat have until Monday at 5 PM Eastern time to make their last roster cut, which will likely come down to either Birch or Dawkins.

Wade had the following to say about the Heat’s young players after their 104-98 victory:

“First of all, our young guys have been amazing. They continue to come in and compete at the highest level. They’re here an hour-and-a-half before we get here on most days….It’s all starting to click for us and everyone’s getting more comfortable with each other.”

Sun Sports’ Jason Jackson asked ‘Flash’ how his leadership has been as he embarks on his 12th NBA season:

“It’s where it needs to be. Being the voice, when I first came here, I was just the guy that leads by example. But now I understand how important my voice is and even at times when I wanna be quiet, I know I have to lead my boys.”

Second-year center Justin Hamilton made his preseason debut after missing the first seven games of the exhibition slate due to undergoing minor heart surgery at the beginning of the month. While he was slow to get going after starting out 0-of-3 from the field, he finished strong by converting on his final three attempts, concluding the game with seven points.

While the Heat finished the preseason with a .500 record, Spoelstra downplayed the importance of the Heat’s victory:

“It’s not about the result right now. Soon it will be, on Wednesday night, but we just want to get better. We want to see some progress. What we’re working on, I think, the last few games we’re a little more consistent on defense, and offensively guys are starting to find their rhythm and where they fit in.”

Despite the close score, Miami shot 54 percent from the field, while Memphis shot just 43 percent. The Grizz were led by Jon Leuer’s 21 points, as he kept the home team in the game by going 8-of-15 from the field. Vince Carter added 13 points by nailing all three of his attempts from beyond the arc.

In regards to his 12th season opener as a member of the Heat, Wade still remains excited for opening day despite being a veteran:

“I am. Tomorrow is not promised in this league. Nothing is guaranteed. So I’m really excited for another season, my 12th year, and opening at home is always a good thing.”

The Heat will open the regular season versus the Washington Wizards at American Airlines Arena on Wednesday night.