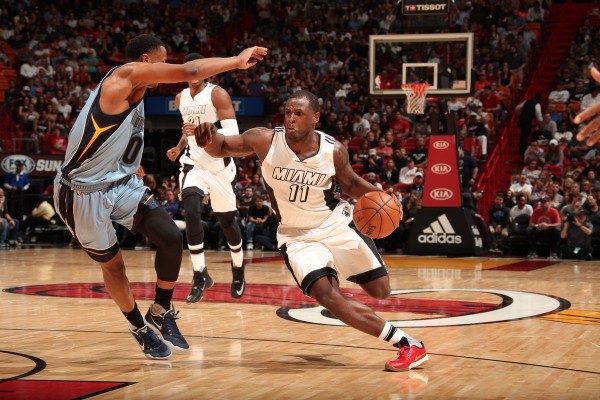 (Miami, FL) — A shorthanded Miami Heat (5-11) team battled with the Memphis Grizzlies down to the wire, but could not find consistent offense down the stretch as they lost 110-107 at AmericanAirlines Arena on Saturday night.

Even though the Heat opened the night shooting 9-of-14 from the field and took an early lead, Grizzlies veteran star Marc Gasol led his team back into the game early on. Gasol scored 19 of his 28 points in the first half and outplayed Hassan Whiteside for most of the night.

Whiteside was unable to play defense in the paint for most of the game because of Gasol’s diverse offensive arsenal. The veteran center made two 3-pointers on the evening and drew Whiteside out of the paint on several possessions. Gasol also forced Whiteside to commit two quick fouls in the first quarter which allowed him to be more aggressive throughout the game against Miami’s star center.

After totaling just 10 points in his past two games combined, Whiteside ended the night with 15 points, 12 rebounds, two blocks.

“That shows you what a great player (Gasol) can do. He adjusted and adapted (from last night),” said Heat head coach Erik Spoelstra. “He was doing it from all over the court tonight.”

The Grizzlies tried to expand their 51-49 halftime lead in the third quarter but Dion Waiters was determined not to let the game get away from the Heat. Waiters scored 19 of his 28 points in the second half, including a pair of triples, in a crucial stretch during the third quarter to keep the Heat within striking distance.

“He was aggressive and making the right plays. He was able to get to the basket against a team that protects the rim pretty well. That got the rest of his game going,” said Spoelstra. “He was shooting the ball very well.”

With the game tied at 82 going into the fourth quarter, Memphis star point guard Mike Conley came to life and got the Grizzlies offense rolling again. He ripped off nine straight points with under two minutes to go to give the Grizzlies a seven-point advantage.

“Conley made every…big…play down the stretch. It’s early right now, but if he’s not an All-star it’ll be a crime,” said Spoelstra.

In the final minute, Waiters made a tough driving layup and a 3-pointer to turn it into a one-possession game.

The Heat had a chance to tie the game with a 3-pointer on their last possession, but after Spoelstra’s designed play broke down, Josh Richardson was forced to hoist a contested, out-of-rhythm shot that fell wide.

The Heat will get another crack at their sixth win on the season as they take on the Boston Celtics at home on Monday in a contest set to tip off shortly after 7:30 pm ET.
[xyz-ihs snippet=”Responsive-ImagenText”]