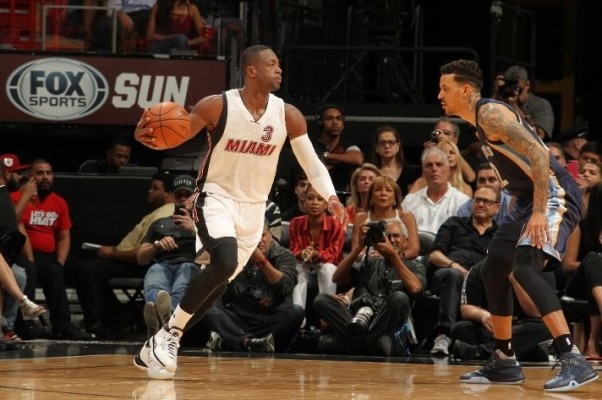 (Miami, FL) – Dwyane Wade’s jumper with 21.9 seconds to play completed a dramatic second-half comeback for the Miami Heat as they defeated the Memphis Grizzlies, 100-97, on Sunday night at American Airlines Arena.

The Heat, who snapped a three-game losing skid, scored the final 11 points of the game after being down 97-89 with 2:53 left in the contest. Gerald Green’s layup began the push, which was followed by him getting fouled beyond the three-point line.

After Green converted all three free throws, Wade took over, first whittling the deficit to a single point with exactly one minute left on a driving layup. After the Grizzlies missed a shot, Wade got the rebound and hit the game-winner from the top of the key, with a clutch bounce on the rim making things even more dramatic.

Rookie Justise Winslow then put a cap on the victory by stealing Mike Conley’s pass in the closing seconds. He was fouled with 0.7 seconds left on the clock and made both free throws to clinch the game.

Miami’s losing streak was definitely on the mind of Wade during the comeback bid:

“We were desperate. We just kept grinding and grinding,” said Wade. “We needed this win, especially at home.”

Wade also talked afterwards about his love of such situations and about the winning shot itself:

“I always want the ball in my hands for deciding moments,” said Wade. “I just raised up, shot it, and finally hit one.”

The comeback had actually begun during the latter portion of the third quarter when Miami trailed by 16 points with 4:07 remaining. However, they managed to keep chipping away at the Memphis lead for the remainder of the game. By the end of the third quarter, they had used a 12-3 run to slice the margin to seven at 78-71.

While happy with the win, Heat head coach Erik Spoelstra acknowledged the ups and downs:

“That was our best frustrating win of the season,” said Spoelstra. “That showed a little bit more of the resolve that we’ve been looking for. In this league, you’re going to have to be able to show some resilience and toughness.”

Key defense down the stretch saw the Heat hold the Grizzlies to just one basket in their final eight attempts. The effort mirrored the start of the game, when Memphis missed six of their first eight shots.

However, in between those two stretches, the Grizzlies managed to hit 61 percent of their field goal attempts and looked to be in control of the contest. The first surge in the final seven minutes of the first quarter included a 17-2 Memphis run.

The Heat will start a brief two-game road swing tomorrow night when they travel to Atlanta to face the Hawks in an 8 p.m. ET matchup. That will be followed by a Wednesday night clash in Brooklyn against the Nets.
[xyz-ihs snippet=”Responsive-Ad”]