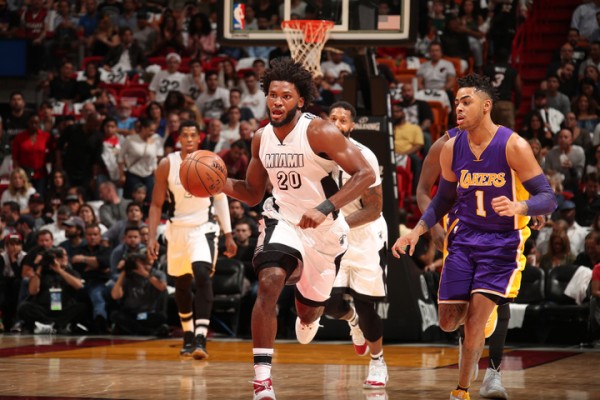 (Miami, FL) – Facing a 19-point deficit in the second quarter, the Miami Heat (10-20) bounced back and put together a resilient performance to knock off the Los Angeles Lakers (11-21) by a score of 115-107 at American Airlines Arena on Thursday night.

“We just got back to our principles, you know, back to our standards and our identity as a team, which is a physical team that prides itself on defense,” Heat small forward Justise Winslow said after the game. “We got that going, got back in the game.”

Winslow, who has battled injury issues all season, had his best game in a Heat uniform thus far as he went off for a career-high 23 points, 13 rebounds, four steals and three assists on a night when Miami retired legendary center Shaquille O’Neal’s No. 32 jersey to the rafters.

Miami rising star center Hassan Whiteside had yet another double-double with 23 points and 13 boards of his own, which ties Oklahoma City Thunder point guard Russell Westbrook and Houston Rockets shooting guard James Harden for the most in the NBA with an eye-opening 23 double-doubles.

“What I like is that he wants to impact more,” Heat head coach Erik Spoelstra said about Whiteside before Thursday’s game. “He’s starting to learn all the different ways you can impact winning, and your initial instinct will be about touches. But that’s a fraction of the game and how you can impact it.”

For the Heat, point guard Goran Dragic added 21 points and seven assists while forward James Johnson came off the bench for 19 points, eight boards and six assists. Miami, which improved to 5-11 at home, managed to finish its six-game homestand strong with a 3-3 record.

Reserve shooting guard Lou Williams scored a team-high 27 points for the Lakers, while shooting guard Nick Young and point guard D’Angelo Russell added 20 and 17 points of their own, respectively.

The young and inexperienced Lakers, who started their season with a surprising 10-10 record, have now lost 11 of their last 12 games.

Up next, the Heat will head out on the road Friday night when they take on the New Orleans Pelicans (10-21) at Smoothie King Center. The contest, which will tip off shortly after 8:00 p.m. ET, will be broadcast live locally on Fox Sports Sun.
[xyz-ihs snippet=”Responsive-ImagenText”]