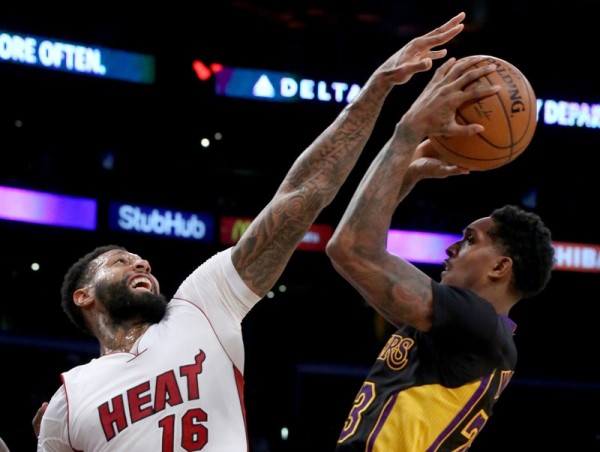 The Lakers had huge contributions from shooting guard Lou Williams and rising star point guard D’Angelo Russell, who scored 24 and 19 points respectively as Los Angeles pulled away from Miami in the second half.

With the Heat trailing the Lakers 76-68 with 5:29 left in the third quarter, things got very chippy between both teams as Los Angeles point guard Jordan Clarkson and Miami point guard Goran Dragic had to be separated by officials and teammates following a skirmish underneath the basket.

Clarkson and Dragic both received technical fouls on the play and were subsequently ejected from the game, with forward James Johnson (20 points on 4-of-7 shots from three-point range, five rebounds and two steals in 34 minutes off the bench) was also given a technical foul for confronting the Lakers bench.

Once Dragic (16 points, three assists and three rebounds in only 22 minutes of action) was lost, pretty much all hope for a Miami comeback victory went down the drain. In the second half alone, the Heat were outscored by the Lakers by a 69-44 margin after only trailing 58-56 at halftime.

“None of us get it, none of us understand it. I could care less about hearing any kind of explanation about it tomorrow,” said Spoelstra about Dragic’s ejection. “The things that we could control certainly was our defense. This is one of our poorer defensive efforts of the year. Every player and staff member in that locker room understands that. We’ve been building on some good things, and we didn’t show that tonight.”

Heat center Willie Reed, who started for the fourth straight game due to star center Hassan Whiteside sitting out with an eye injury, led the team in scoring with 22 points (10-of-15 shots made from the field), 12 rebounds and three blocked shots.

However, the presence of Whiteside was sorely missed by the Heat in yet another game, as they were outrebounded by a whopping 62-41 margin.

“We lost Goran and we just couldn’t get stops down the stretch. They pretty much scored at will and we gave up 127 points,” said Reed. “That’s just something we’ve got to dig in, try to figure out a way of how we can come together in situations like that and make the best of them.”

The Heat had no answer whatsoever for the Lakers in the paint, as Los Angeles small forward and former Heat player Luol Deng (19 points and 14 rebounds) and reserve power forward Tarik Black (10 points and 11 rebounds) carved the Heat up in the paint on offense and defense.

Off the bench, Heat guard Tyler Johnson scored in double figures with 11 points and five rebounds, while shooting guard Dion Waiters added nine points and two assists in just his second game back following a lengthy absence from a groin injury.

Up next, the Heat will remain in Los Angeles and are scheduled to take on the Los Angeles Clippers (25-14) at Staples Center on Sunday afternoon. The contest, which will tip off shortly after 3:30 p.m. ET, will be broadcast live locally on Fox Sports Sun.
[xyz-ihs snippet=”Responsive-ImagenText”]