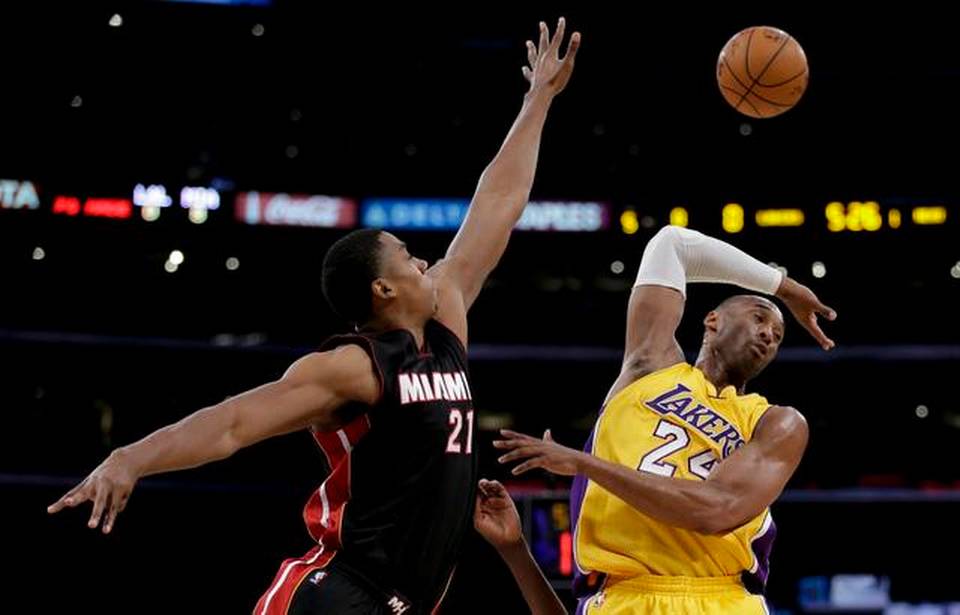 The Heat raced out to an 18-0 lead to start the game with all of their points scored in the paint. The Lakers were held to just 31.5 percent shooting from the field, the lowest mark the Heat have held any opponent to this season. All of Miami’s first half field goals were from within the paint.

Mario Chalmers scored 19 points, including nine points in the fourth quarter, while Hassan Whiteside continued his dominant stretch by posting 15 points, nine rebounds and five blocks on 7-of-9 shooting.

Despite opening the game with such a huge lead, the Heat allowed the Lakers to close the first quarter on a 10-2 run to enter the second quarter down 22-12. Miami consistently struggled with turnovers, finishing the game with a total of 18.

Los Angeles hung around until the end of the game, with Kobe Bryant missing a game-tying three-pointer as time expired to seal the Heat’s second straight victory at Staples Center over the past couple of days. It is the first time Miami has won back-to-back games since November 22-23.

Chalmers stressed how important this victory was for the team’s momentum:

“We definitely needed it. It’s a big win. Coming into the Staples Center getting two wins against two great teams. So it’s good for building momentum for us and we gotta go to Golden State and get another one.”

Dwyane Wade left the game for good entering halftime, as it was ruled he would be out for the rest of the game to a left hamstring injury. It is the same hamstring injury that left Wade sidelined for seven games in November.

Wade shed light on his injury following the game:

“I knew instantly. I played five more minutes, but I felt a little light pull. As you could see my expression, I was pissed.”

The contest was a tough one to watch with both teams struggling to shoot the basketball. The Heat finished the game knocking down just 2-of-16 (.125) from beyond the arc, while the Lakers shot just slightly better on 4-of-23 shooting (.174) on three-pointers.

Miami’s defense made life difficult for the Lakers as Bryant converted on just 3-of-19 from the field, going 2-of-9 from three-point range. He finished the game with 12 points, leading the Lakers in scoring along with Ed Davis and Jordan Hill, who both scored 12 points apiece. Nick Young was held to just eight points on 2-of-11 shooting.

Wade commented on the Heat’s 18-0 start, which marked the second biggest shutout to start a game in the NBA this season, behind the Cleveland Cavaliers’ 21-0 run over the Charlotte Hornets earlier this year:

“It can’t get any better. To come out the way we did obviously try to make them take jump shots, they didn’t make any early. I think we did a great job offensively moving the ball, getting to the things we want to get to and having patience.”

58 of the Heat’s 78 points were scored in the paint. Chris Andersen contributed 12 points on 5-of-6 shooting with eight rebounds.

Despite being outscored 22-17 by the Lakers in the decisive quarter, ‘Rio was able to carry the Heat to a victory toward the end, converting on two baskets on back-to-back possessions in the last 1:14 of the game to maintain the lead for Miami. His reverse layup with 1:14 remaining put the Heat up 76-72 following a Davis tip-in for the Lakers that had cut their deficit to just two points.

“I tried to be a little more aggressive. I feel like I’ve been lackluster, not playing to my capabilities the last couple of weeks. So I just came in here and changed it up.”

Due to Wade’s injury, Shabazz Napier entered for the first time at the beginning of the fourth quarter. He played the entire period and closed out the game on the court with the Heat missing D3.

Miami will continue their road trip by visiting the Bay Area to play the league-best Golden State Warriors (30-5) on Wednesday night. Tip-off is set for 10:30 pm EST and the game will be broadcast on Sun Sports.