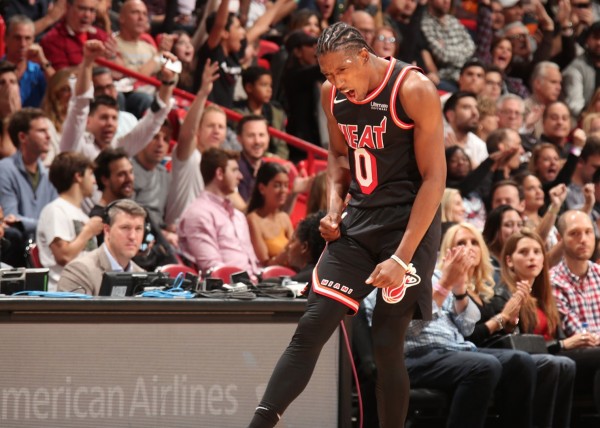 (Miami, FL) – The Miami Heat have had a very tough time taking advantage of their home court so far this season with just a 5-7 record before Saturday night’s matchup against the Los Angeles Clippers. While it once again looked as though the Heat were going to give up a double-digit lead and end up losing, they were able to rise to the challenge and come away with a much-needed victory, 90-85.

The Heat had been up by double digits early in the third period and looked to be on the verge of pulling away for good, but after a 9-0 Clippers run, they found themselves up just two points at 56-54.

The two teams traded shots down the stretch of the third quarter, and while the Clippers brought the score to within one, Josh Richardson, who was on fire all night long on his way to a career high 28-point performance, hit a clutch three to put the Heat lead at four heading into the final frame.

“I think I just had to get us going,” Richardson said of his night in which he shot 6-of-8 from the three-point line. “Things weren’t coming easy, the Clippers are a team that are starting to play super hard. Those are tough to play against. Things were tough for guys so I kind of had to take things into my own hands a little bit.”

In the fourth quarter, the Clippers continued to battle and with just 10:24 left in the game, they captured their first tie of the night when forward Montrezl Harrell hammered home a huge dunk. Kelly Olynyk, who had 11 points, five rebounds, five steals, and four assists in the game, responded with a 3-pointer, but the Clippers answered back with a three of their own.

The following two minutes were scoreless as the Heat came up with several huge defensive stops, but could not capitalize on the other end of the court. Then, with “Let’s go Heat” chants ringing in American Airlines Arena, Richardson nailed yet another massive 3-pointer to put the Heat up three points once again.

Clippers international sharpshooter Milos Teodosic helped carry his team on back-to-back scoring possessions to give Los Angeles its first lead of the night, 77-75. The Heat hit back, though, bringing the game to a tie at 79-79 with just over four minutes left in the game.

Once again, Richardson hit a massive 3-pointer with 3:37 left in the contest, and while the Clippers kept fighting, the Heat capitalized when it counted. Olynyk added to the Heat lead with a clutch 17-foot jumper and when the Heat had fallen behind after a 5-0 run by the Clippers, Goran Dragic hit his biggest shot of the game to put the Heat up 86-85 with a little over a minute left in the contest.

One minute later, Richardson was sent to the line to ice the game. As he had all night, the talented youngster, who is quickly becoming an offensive focal point for the Heat, hit two free throws to seal the win.

Saturday night’s win was huge for a number of reasons. Not only did it give the Heat a winning record of 15-14 on the season and move them to within just one game of the Southeast Division-leading Washington Wizards, it also gave Heat head coach Erik Spoelstra win No. 455 of his career, making him the winningest coach in Heat history.

The Heat even released a touching video minutes after the victory to honor Spoelstra’s incredible career as the Heat head coach.

The victory did come with a loss, however, as team captain James Johnson will likely be joining Justise Winslow and Hassan Whiteside in the recovery room after suffering a right-ankle injury in the first quarter of the game.

While Johnson’s loss is certainly a hit to the team as they prepare to embark on a two-game road trip, Jordan Mickey continues to provide productive minutes as his teammates recover as he put in an incredibly well-rounded nine-point, four-rebound, two-assist, two-steal, and two-block performance.

Many other players put in solid performances as well. Dion Waiters ended the night with 13 points, Bam Adebayo helped contain Clippers big man DeAndre Jordan and finished with seven points and five rebounds, and Wayne Ellington added nine points despite an uncharacteristically cold night from beyond the arc where he went 2-of-7 in the game. The sole underperformer of the night was shooting guard Tyler Johnson who contributed zero points on a dismal 0-of-9 shooting.

The Heat will have a one-day rest before heading to Atlanta to try and secure their third win in a row against the Hawks.
[xyz-ihs snippet=”HN-300×250-TextnImage”]