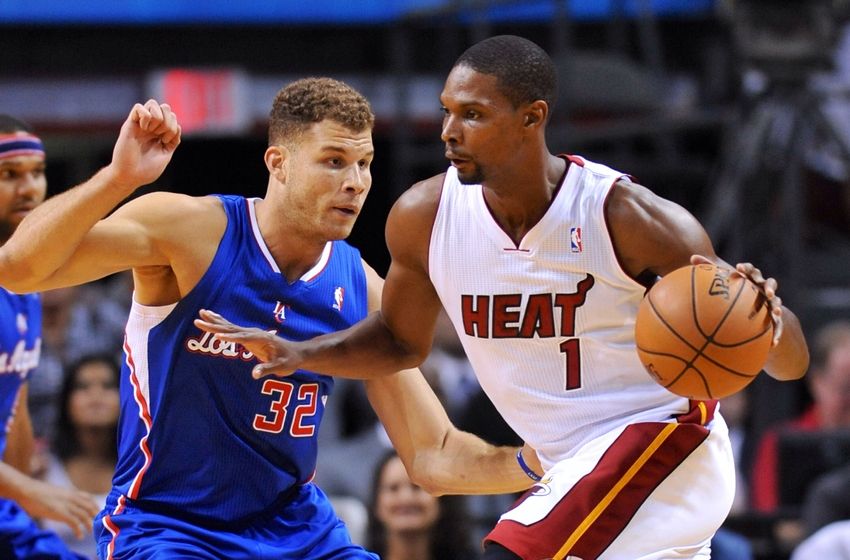 (Miami, FL) — The Miami Heat (6-5) host the Los Angeles Clippers (6-4) at the American Airlines Arena on Thursday night in a matchup of interconference opponents.

As the Heat look to win their second straight game following a 95-83 win over the Brooklyn Nets on Monday, they will have to do so without Dwyane Wade and Luol Deng. Wade has missed the last three games due to a hamstring injury, and he’s considered doubtful for Thursday’s game versus the Clippers. Likewise, Deng is also considered doubtful due to a wrist injury, the same injury that kept him out in the victory against the Nets.

In the win over Brooklyn, Mario Chalmers remained in the starting lineup for the second consecutive game and led the team to victory as he scored 22 points with five assists and two steals. He was aided by a strong performance by Chris Bosh, who contributed 15 points and nine rebounds after a shooting slump that had seen him go 12-for-49 from the field during the Heat’s three-game losing streak.

Chalmers stated it was important for the Heat to defeat the Nets to end their losing stretch:

“We needed this game tonight. After the losing streak we were on, it’s good to get on the road and get a big win like this.”

In the absence of its veterans, the Heat’s young core–Norris Cole, Shabazz Napier and James Ennis–all scored in double-digits in the win.

The Clippers defeated the Orlando Magic, 114-90, on Wednesday night in their first contest of a seven-game road trip. Los Angeles had their way with Orlando as they sat out their entire starting lineup in the fourth quarter. Their bench outscored the starters, 60-54. Coach Doc Rivers complimented his bench on its scoring output:

“Our bench outscored our starters (60-54), which is a first. I thought (reserves) were great in the first half and they came in in the second half and did the same thing. When you play like that, like a whole team, it’s good.”

Chris Paul felt it was much-needed rest for the starting lineup, considering its upcoming game with the Heat:

“It was real big, especially this being a seven-game road trip for us and going to play against a tough Miami team tomorrow. We needed to get that rest.”

Jamal Crawford contributed 22 points to the cause as the Clippers led by as many as 28 points, while the Magic failed to establish a lead at any point during the game.

When both of these teams tip off at the AA Arena, it’ll mark a matchup of two of the worst rebounding teams in the NBA. The Clippers rank 29th in boards, while the Heat rank dead last. With Los Angeles a finesse team that thrives off of the fast break, they simply lack rebounders outside of DeAndre Jordan. Miami on the other hand, has been decimated by injuries to its front line–Chris Andersen, Justin Hamilton, Udonis Haslem and Josh McRoberts have all missed a significant portion of the season due to injuries.

McRoberts, however, is likely to make his return from a toe blister injury, which sidelined him for the team’s last three games. Erik Spoelstra warned that there was still a chance McRoberts would miss the game, despite practicing on Wednesday:

“That was encouraging. We’ll see. There’s no way to tell. We’ll have to see how his foot responds.”

While both teams move the ball well, with the Clippers ranking ninth in assists per game and the Heat ranking 10th, the big disparity lies in offensive and defensive points per game.

On offense, Los Angeles is a well-oiled machine, ranking ninth in the NBA with 102.8 points per game. Miami ranks just 21st at 97.5 points per contest.

However, the Heat does hold the advantage on defense, as it ranks seventh in the league, allowing just 95.8 points on average. The Clippers rank 20th, giving up 101.4 a game.

With Miami likely to play without Wade and Deng once again, look for Chalmers to start at shooting guard with either Ennis or Danny Granger starting at the small forward position. Granger made his first start and appearance of the season versus the Nets, scoring four points in 20 minutes of action.

Spoelstra stated Granger’s start was due to an “emergency situation:”

“Extreme circumstances call for extreme measures. He’s been medically cleared, he just hasn’t had a lot of full contact opportunities.”

Tip-off is set for 8:00 pm EST on TNT.
[xyz-ihs snippet=”Responsive-ImagenText”]