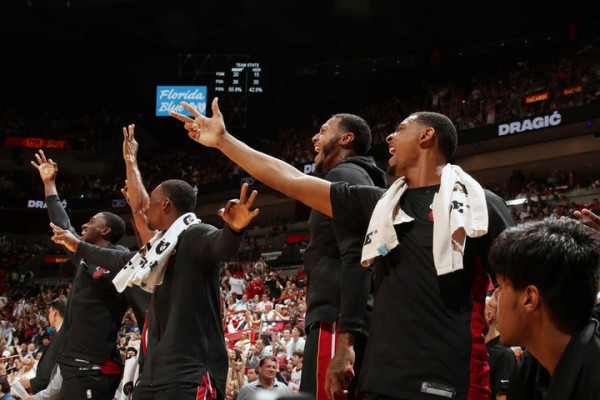 (Miami, FL) – In their home opener on Saturday night, the Miami Heat (1-1) pulled away early in the second half and were able to hold on down the stretch with a 112-108 win over the Indiana Pacers (1-2) at American Airlines Arena.

Despite not having the services of star center Hassan Whiteside because of a bruised left knee, the Heat played very well as a team and managed to balloon their lead in the third quarter to as many as 21 points.

The highlight of the night came early in the first quarter when Heat power forward James Johnson drove to the basket and threw down a thunderous, one-handed posterizing dunk over Pacers guard Victor Oladipo, which immediately brought the Miami bench to their feet.

“So much of this is confidence and having people believe in you,” Heat head coach Erik Spoelstra said of Johnson. “He’s a very good shooter. When the ball is in his hands, he creates so many other good things for your players. He creates open shots and he’s such a selfless offensive player. He’ll find his rhythm.”

Oladipo had a game-high 28 points and four steals for Indiana, which also got 18 points and 12 boards from power forward Domantas Sabonis and 14 points apiece from forward Thaddeus Young and center Al Jefferson.

The Pacers were outscored 37-19 by the Heat in the second quarter, but they nearly pulled off a big comeback when they outscored Miami 32-21 in the fourth and cut the lead down to as little as two points.

Heat point guard Goran Dragic, who led his team on the night with 23 points, five rebounds and three assists, acknowledged that Miami must do better on defense in order to be more successful going forward.

“We relaxed too much, I would say,” Dragic said immediately after the game.”That shouldn’t happen. We should compete, especially defensively. We don’t care about the offense, but defensively we need to get better. We let them in and it was a tight game in the end, but we need to do a better job about that.

For Miami, shooting guard Dion Waiters added 19 points and two assists, while newcomer Kelly Olynyk had a solid night off the bench with 13 points, nine boards and four assists.

“I thought he was very comfortable there playing in the second unit,” Spoelstra said of Olynyk during his postgame press conference. “I thought that was probably his best game on both ends since he’s been with us.”

As a team, the Heat went 14-of-34 from behind the arc, managed to block 11 shots on the night and forced the Pacers to turn the ball over 11 times.

Up next, the Heat will play the second contest of their lengthy six-game homestand on Monday night when they host the Atlanta Hawks (1-1) at American Airlines Arena. The game, which will tip off shortly after 7:30 p.m. ET, will be broadcast live locally on Fox Sports Sun.
[xyz-ihs snippet=”Responsive-ImagenText”]