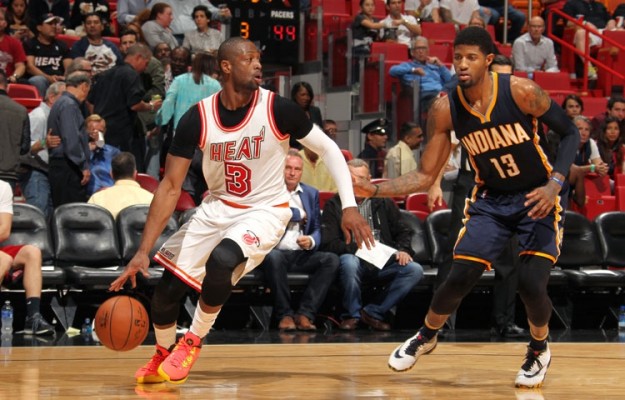 The Heat overcame a horrible first quarter which saw the Pacers open the game on an 11-0 run. They trailed 16-2 at one point, before ending the first quarter trailing by a score of 25-15.

While the beginning of the game was entirely forgettable, Miami managed to outscore Indiana in each of the final four quarters, including 13-5 in the decisive overtime period.

Dwyane Wade returned after missing the past two games due to knee soreness and struggled on his way to a 4-for-21 night from the field. However, he was third on the team in scoring with 16 points and knocked down two clutch free throws with 4.5 seconds remaining in the game to give the Heat an 88-87 lead.

Unfortunately on the ensuing possession, Wade fouled Pacers guard Monta Ellis, putting him at the free-throw line. Fortunately for the Heat, Ellis converted on only one of two free throw attempts to force the game into overtime.

From that point on, it was all smooth sailing as the Pacers struggled to score in the extra period. Indiana went 2-of-10 from the field in overtime.

Goran Dragic led the Heat with 24 points, eight rebounds and five assists, while Luol Deng notched his third consecutive double-double with 13 points and 16 rebounds. Deng exited the game late in the third quarter due to a dislocated middle finger on his right hand. Despite the injury, he returned to the game midway through the fourth quarter.

Coach Erik Spoelstra singled out Deng for his superb performance so far during the 2015-16 season:

“Luol has been fantastic all year, because he feels more comfortable this year with us. I think last year he was deferential in terms of how he wanted to insert and impose himself.”

Hassan Whiteside came off the bench once again for the Heat and excelled in his new role. The 7-foot center posted 19 points, 18 rebounds and six blocks in his second game back from suspension. Whiteside’s impact in the low post helped the Heat score 62 points in the first half.

Dragic spoke of the Heat’s struggles early on in the game:

“We tried to push the ball a little bit faster, tried to make some easy plays. Tonight I felt we were running but we couldn’t get our shots to fall in.”

Paul George led the Pacers with 31 points and 11 rebounds, but it was a wasted effort, as Indiana squandered a huge first-quarter lead. Myles Turner, the 19-year-old rookie out of the University of Texas, complimented the Pacers in a huge way by providing 16 points and some clutch baskets late in the fourth quarter.

This game was your typical Heat-Pacers grind-it-out matchup featuring tough defense and lethargic offense. The Heat converted on just 38 percent of their shots, while the Pacers were only slightly better at a 39.1 field goal percentage. Despite both offenses being stagnant for most of the night, Miami’s 66-to-46 advantage on the glass proved to be the difference.

“It looks like every time we play the Pacers we overcome a bad start, it’s overtime and then we win.”

The Heat will remain home as they host the league-best Golden State Warriors at American Airlines Arena on Wednesday night. The game will tip off at 7:30 PM EST and the game will be broadcast locally on Sun Sports.
[xyz-ihs snippet=”Responsive-Ad”]