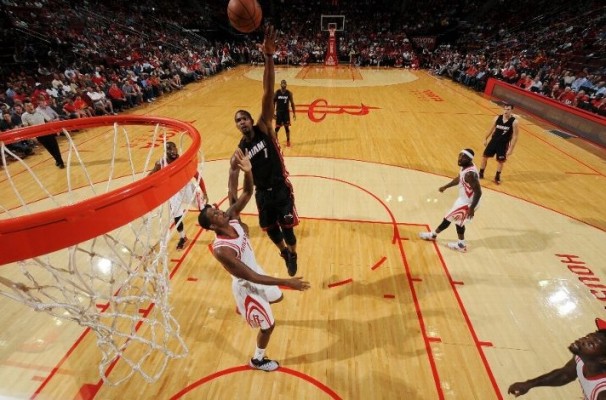 (Houston, TX) – A solid fourth quarter comeback by the Miami Heat helped give them their second win in five tries during the preseason as they knocked off the Houston Rockets, 105-100, at the Toyota Center on Saturday night.

The Heat, which put its regular starting five on the court for the first time this year, trailed 84-76 entering the final quarter. However, within four minutes, they had knocked down the deficit to a single point, courtesy of an 8-1 run. Then, after Houston pushed it back up to six at 90-84, the Heat used a 14-2 run, including nine unanswered points, to take their first lead since halfway through the first quarter.

The Rockets wouldn’t go away, scoring six straight points to tie it at 98 with 2:23 to go. However, Tyler Johnson provided six consecutive points down the stretch and Keith Benson split a pair of free throws with 6.4 seconds left to cap the win.

After the game, the Heat’s head coach Erik Spoelstra was happy about the win, but also excited about the return of the starting group:

“It’s encouraging and it’s important. I think the last few days, everybody has been encouraged by it,” said Spoelstra.

Gerald Green led Miami with 21 points, one of five Heat players in double figures, including Luol Deng with 15 and Hassan Whiteside and Johnson each adding 12 for the night. Whiteside also hauled in nine rebounds, while rookie Justise Winslow managed to grab six himself in addition to handing out eight assists.

At the start, both teams put together runs, beginning with the Heat scoring 10 unanswered points to change an early 7-2 deficit into a 12-7 advantage. However, the Rockets first charged back with a 13-4 run midway through the first, then tacked on an 11-4 surge later on to hold a 33-27 lead after one quarter of action.

Solid defense against Miami was the main reason for both dry spells, with the Heat getting off just three outside shots over a three-minute span for the first effort. In the latter instance, splitting four shots while also committing a trio of turnovers was the difference.

In the second, Houston tried to pull away, but the duo of Green and Chris Bosh combined for 12 points in changing an eight-point deficit into a 43-41 lead with under nine minutes remaining before intermission.

The midway point saw both teams battle back and forth before the Rockets outscored the Heat 11-5 in the final four minutes to take a 62-56 lead into halftime.

When the Heat was able to get a shot during that first half, they were effective, hitting nearly 63 percent of their 35 attempts.

Once the two teams returned to the court, Miami was frustrated throughout the third as Houston essentially matched them shot for shot. The margin never dropped below six, but yet the Rockets never managed to extend their lead higher than 10, and held their eight-point lead that led to the fourth quarter heroics.

The Heat was able to come away with the victory despite a rough night at the free-throw line experienced by an obviously rusty Whiteside, who missed on all nine of his free attempts at the charity stripe.

On the injury front, Miami’s Udonis Haslem escaped with only a few stitches under his left eye after being on the receiving end of a head butt from Houston’s Terrence Jones.

Miami doesn’t have much time to savor this win, with a trip to Atlanta to face the Hawks on Sunday night next up, beginning just after 7 p.m. ET. Miami will then close out the preseason slate with a home game on Wednesday against the Washington Wizards and a Friday night matchup in New Orleans against the Pelicans.
[xyz-ihs snippet=”Responsive-Ad”]