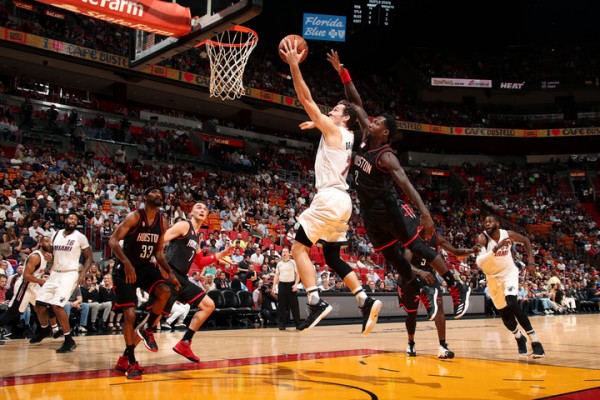 (Miami, FL) —  The Houston Rockets came out uncharacteristically sluggish Tuesday night, and the Miami Heat simply took advantage. Despite James Harden’s impressive triple-double, the Heat came away with a much-needed victory, as they grounded the Rockets, 109-103.

Perhaps the Rockets weren’t taking the Heat seriously enough, or perhaps they were coming off a late night in South Beach. Either way, the young and hungry Heat made sure to capitalize on Houston’s lackluster efforts.

Prior to Tuesday’s matchup in Miami, the Heat had not played a home game since Jan. 1. Evidently, they were thrilled to be back because, unlike the Rockets, they were firing on all cylinders. However, despite being the clear aggressors in the first two quarters, Harden came out swinging in the third and started making things difficult for Miami. The MVP candidate scored 16 points in the third quarter and both teams were tied at 79 heading into the fourth.

All season long, Miami had had trouble closing games out, but in this game, the Heat actually saved their best quarter for last. Harden continued to attack the basket hard in the final period, but Miami’s defensive efforts seemed to suffocate the rest of the usually high-flying Rockets.

With less than five minutes remaining in the game, the Heat managed to carve out a five-point lead, with the score being 96-91. Then, sharpshooter Wayne Ellington landed a dagger 3-pointer to extend the lead to eight points. From there, Miami controlled the tempo entirely, ending the game on a 19-5 run to send the Rockets packing.

Despite the Rockets loss, Harden’s stat line was quite impressive. He scored 40 points to go along with 12 rebounds and 10 assists. Big man Montrezl Harrell added 13 points for Houston, while guard Patrick Beverley chipped in 12 of his own.

As for Miami, it was a full team effort. Goran Dragic led the way with 21 points, eight rebounds and eight assists. Tyler Johnson, Dion Waiters and Wayne Ellington scored 16, 17 and 18 points, respectively. Meanwhile, Hassan Whiteside had a typical night with 14 points and 15 rebounds.

Ellington, who made five of his nine 3-point attempts in the game, spoke about the team’s impressive efforts after the win:

It’s true — the Heat’s record entering Tuesday night’s matchup (11-30) certainly did not indicate that they’d be capable of taking down a Western Conference juggernaut like the Harden-led Rockets. Miami, however, did not look like an 11-30 (now 12-30 with the win) team in this one.

After the game, Heat head coach Erik Spoelstra offered his take on how the Heat were able to overcome such a fearsome foe:

“It’s a byproduct of all those practices on the road that led to our last two practice sessions,” Spoelstra told the media. “Instead of feeling sorry for ourselves (we said) just get to work, keep on working to get better and a lot of the things that have been hurting us in some of these close games, we did better tonight, particularly from a competitive standpoint against a very good, explosive offensive team.”

The Heat really did do better tonight. They held a Rockets team that normally averages 115 points a game to 103 points, and forced them to commit 18 turnovers and miss 54 of their 90 shot attempts.

Now the Heat must see if they can keep it up when they face the Dallas Mavericks in Miami on Thursday. As for the Rockets, they will have to bounce back quickly as they face the Milwaukee Bucks Wednesday night in Houston.
[xyz-ihs snippet=”Responsive-ImagenText”]