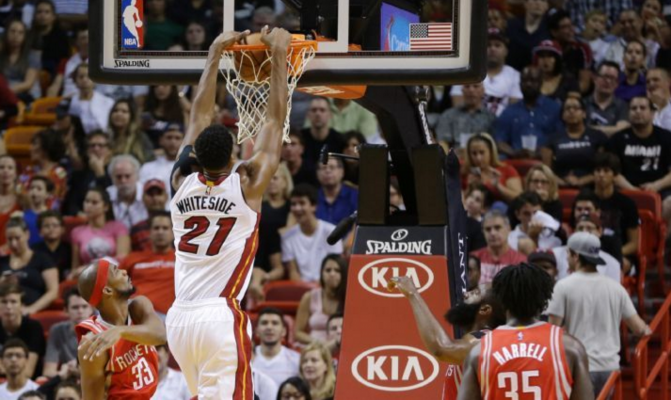 (Miami, FL) — In their third game of the season, the Miami Heat (2-1) rallied from a 19-point halftime deficit to blow out the Houston Rockets (0-3) by a score of 109-89 on Sunday night at AmericanAirlines Arena.

Miami, who trailed by as many as 21 points in the second quarter, looked like a completely different team in the second half to secure a 20-point victory. In the first half, the Heat had a tough time containing Rockets shooting guard Marcus Thornton (21 points, two assists and two rebounds), who connected on his first five three pointers attempted.

In the fourth quarter alone, the Heat went on a 21-1 run over the Rockets to send them to a third consecutive 20-point loss.

Heat center Hassan Whiteside had a monster game, as the 26-year old led all scorers with 25 points, 15 rebounds, three steals and two blocks on the night. However, it was announced by the team after the game that Whiteside had received four stitches above his left eye but is expected to be just fine.

“Fans have been questioning my effort,” said Whiteside in the locker room after his team’s win. “Quote this: ‘You can question a lot of things about me – my effort isn’t one of them. I play my hardest every night.'”

Miami was fired up during the second half, as they outscored Houston 65-26 during the final 24 minutes of the contest. This was Miami’s largest comeback win since their 27-point second-half rally against the Cleveland Cavaliers during a 27-game winning streak back on March 20th, 2013.

“UD (Udonis Haslem),” Wade said about his teammate getting the team pumped up at halftime. “That’s all I got to say. UD got on us like a captain should. It was all bleep, bleep, bleep.”

The Rockets, who played without the services of star center Dwight Howard, looked great in the first half before completely falling apart. James Harden, who had a miserable game, recorded 16 points on a dismal 2-of-15 from the field and 0-of-10 from beyond the arc. However, he was efficient at the charity stripe, sinking 12-of-14 free throws.

On a side note, Heat head coach Erik Spoelstra celebrated his 45th birthday today, and his players definitely came through in the clutch for him. His thoughts on turning 45?

“I have nothing to complain about in my life,” said Spoelstra with a smile.

Up next, the Heat will host the Atlanta Hawks on Tuesday night at AmericanAirlines Arena. The matchup, which is scheduled to tip off shortly after 7:30 pm ET, will be broadcast nationally on NBATV.
[xyz-ihs snippet=”Responsive-Ad”]