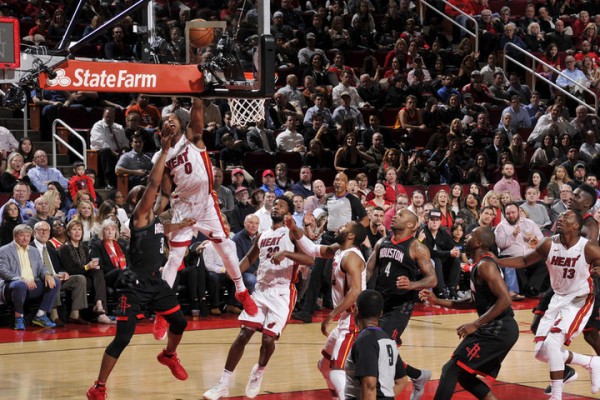 (Houston, TX) – To be the best you have to beat the best. On Monday night the Miami Heat looked to do just that when they headed to Texas to take on the Houston Rockets.

While the Heat were missing both Goran Dragic and Tyler Johnson due to injury against one of the NBA’s best backcourts, they matched the Rockets blow for blow for almost the entire contest. Unfortunately they failed to come up big when it mattered most on their way to a 99-90 defeat.

“We felt like the game was in our wheelhouse,” Heat head coach Erik Spoelstra said following the game. “Just liked the tempo and everything about the game, but they finished and finished in high fashion, making shots, and we struggled to get good clean looks on the other end.”

Miami began the game hot and led by as many as 14 points in the first half. As all great teams do though, the Rockets fought their way back into the contest and by the beginning of the final quarter of play had overtaken Miami, 71-68.

The fourth period started out well for the Heat when Bam Adebayo hit a layup to bring the game to within one point. Moments later, Josh Richardson, who finished the night with 12 points and three rebounds, hit a 3-pointer to give them back the lead, 73-71.

Eric Gordon answered quickly on the other end to bring the game to a tie. Then, Chris Paul hit a 3-pointer to give the Rockets back the lead. The Heat responded by clamping down on defense and scoring four points in a row to claim a one-point advantage, 79-78, with just over nine minutes left in the game.

The Heat looked to build upon their small lead, but failed to convert on their following possession. With just under eight minutes left in the game, Paul hit yet another shot from beyond the three-point line to put the Rockets up two points, 81-79.

Richardson came up big when he hit a long jumper to tie the game up at 81-81, and when James Harden lost the ball out of bounds, it gave the Heat a chance to regain control. Kelly Olynyk took advantage of the opportunity and drew a shooting foul to put Miami up, 83-81.

Once again, the Heat had an opportunity to extend their lead, but after forcing a bad shot on the defensive side of the ball, they failed to grab the board and the Rockets capitalized on a fresh shot clock and hit 3-pointer to claim a one-point lead with 5:49 left in the game.

The battle continued as both teams traded shots on their way to an 88-88 tie. Then, with just over three minutes left in the game, Harden proved why he’s one of the best players in the league when he hit a deep 3-pointer to give the Rockets a three-point lead.

James Johnson, who finished with 10 points, four assists, and three rebounds, answered on the other end to bring the game to within one point, but Harden scored again to extend Houston’s lead. While Hassan Whiteside had another impressive game, finishing the night with 22 points, 13 rebounds, three steals, and two assists, he committed a costly error when he tried to create an open shot only to turn the ball over during a crucial offensive possession.

Whiteside made another momentum-killing mistake shortly after when he grabbed a big board on the defensive end only to cough it up seconds later as a result of miscommunication.

With a minute left in the game, the Rockets were up 93-90 and had a chance to solidify the victory. Paul then came up big in the clutch when he hit a jumper to give Houston a five-point lead with 38 seconds remaining in the game.

Seconds later, the Rockets sealed the win when Whiteside had a shot blocked under the basket and Clint Capela hit an easy layup with just 18 seconds left in the game.

“We had them under 100 I believe,” Wayne Ellington, who finished with 13 points, five rebounds, and two assists, said following the game. “That was the game plan, that was what we wanted to do. We just came up a little short.”

Despite failing to make plays in the waning minutes of the game, the Heat certainly earned themselves a moral victory. The Rockets have lost just 12 games so far this season, and with two minutes left in the game, Miami was in great position to deal them another. Still, a loss is a loss and Monday’s defeat now gives Miami a disappointing 2-3 record in their last five games.

Luckily, the Heat will finally be headed back to Miami after a five-game road trip to face off against the Sacramento Kings. Hopefully being in front of a home crowd will give them the confidence they need to begin yet another multi-game winning streak.
[xyz-ihs snippet=”HN-300×250-TextnImage”]