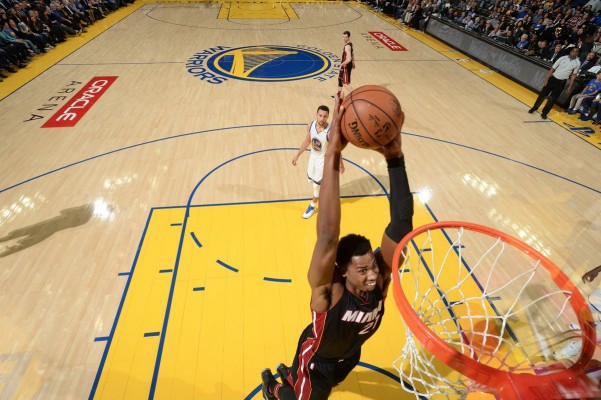 (Oakland, California) — The Golden State Warriors were expected to make quick work of the Miami Heat Tuesday night; instead, the visiting Heat came out with all the energy as it took a late fourth-quarter rally for the Warriors to eventually edge out the Heat in Oakland, 107-95.

Even without the sharpshooting Klay Thompson suiting up, the Warriors entered Tuesday night’s game as heavy favorites.

Miami kept things surprisingly competitive early on, though. In fact, the Heat managed to carve out a quick 10-point lead against the Warriors late in the first quarter before Golden State quickly roared back. The Heat kept fighting though, and by the end of the first half, Miami had regained the lead, 54-53.

In the second half, though, the Warriors became the clear aggressors. Alhough they weren’t hitting all the shots they were used to, their energy, talent and depth were enough to build a double-digit, third quarter lead.

Still, Miami refused to go away.

The Heat went on a major scoring run early in the fourth quarter and cut the deficit to just three, at 82-85. Unfortunately, that would be the closest Miami would get the rest of the way.

Led by Kevin Durant, the Warriors stepped on the gas in the final minutes and simply blew the game open.

Ultimately, the Heat weren’t able to capitalize on an off-shooting night for the Warriors, but they did show some brief flashes of greatness throughout the contest. They held the Warriors to just 45 percent shooting on the night and were able to put up 56 points in the paint as opposed to Golden State’s 36.

“You can see the progress,” Heat head coach Erik Spoelstra said of his team after the game. “I thought the way we defended them in the half court was pretty good, especially against a team with that much offensive firepower.”

Towards the end of the game, though, the biggest difference maker for the Warriors was their superior ability to score in transition. In fact, they led Miami in fast-break points, 34-12, on the night.

“In transition, yeah, that’s where that team is really devastating,” Spoelstra admitted. “They can put up points in a hurry. They can get you backpedaling and scrambling all the way back to the three-point line.”

For Miami, Hassan Whiteside led the way with a monster night. The 7-footer scored a staggering 28 points and pulled down 20 rebounds. He spoke about his performance in the locker room after the game:

“They (the Warriors) don’t have too many weaknesses,” Whiteside said. “But one of the things I tried to really do is exploit their (poor) rebounding. Coach left me out there a little longer, I played 37 minutes, so he just kept me out there and I got to collect them.”

Goran Dragic chipped in with 17 points for Miami and Tyler Johnson led all Heat guards with 18 points.

After the loss, Johnson spoke about the team’s efforts:

“For the most part, I thought the ball was moving pretty well. I thought we got good shots,” Johnson told reporters in reference to the Heat’s play early on.

However, the Warriors cranked it up a notch when it mattered, seemingly at will.

“That’s why they’re in contention for the title this year,” Johnson remarked. “They have multiple All-World players. As soon as you stop one you almost forget about another. Hats off to them, though. They did what they were supposed to do to win.

The Heat have now lost nine of their last 10 games to fall to 11-29 on the year. They’ll play the Bucks in Milwaukee on Friday to wrap up their brutal six-game road trip.

Meanwhile, the Warriors improve to 33-6, still good for best in the NBA. They’ll host the Detroit Pistons on Thursday night.
[xyz-ihs snippet=”Responsive-ImagenText”]