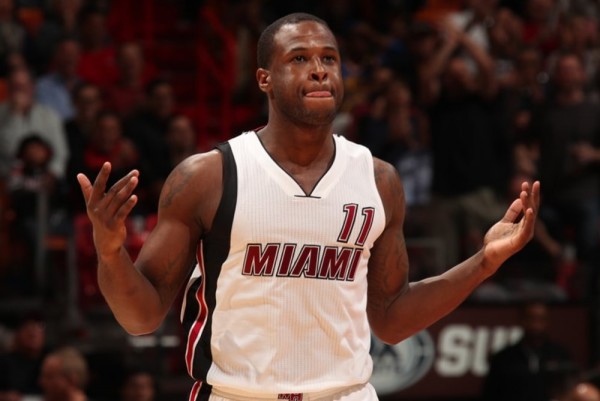 (Miami, FL) — The Miami Heat may be 14th in the Eastern Conference standings, but you’d never know it by the way they played Monday night against the Golden State Warriors. It took every second of all 48 minutes, but in the end, the Heat took down the mighty Warriors, 105-102.

It was a matchup of two franchises that know a thing or two about winning championships in the modern era. Both the Heat and Warriors have been to the NBA Finals multiple times since 2011, however, the two teams currently reside at opposite ends of the NBA standings.

“They’ve (the Heat) had some really difficult things that have happened to them in the last year or two,” Warriors head coach Steve Kerr said before tipoff.

While it’s true that the Heat have fallen on hard times the last year or so, they certainly looked like a confident bunch Monday night. In the first half, they took it straight to the Warriors and matched their scoring efforts tit-for-tat in the first half.

Surely, the defensive-minded Heat didn’t plan to engage in an early shootout with the high-scoring Warriors, but that’s exactly what happened. The two teams exchanged leads several times before the half, and ultimately went into locker room with Golden State leading 48-46.

In the third quarter, it looked as if the Warriors were about to pull away, as they went up by eight. Instead, Dion Waiters led Miami on a wild 12-2 run to end the period. Wayne Ellington then hit a three-pointer at the start of the fourth to extend the run to 15-2. At that point, the Warriors stepped on the gas and went a run of their own to tie the game at 82 points apiece. Waiters, however, continued his scorching scoring streak and helped the Heat open up a 10-point lead with under six minutes to go.

Then, as one would expect, the Warriors roared back again.

With 21 seconds remaining in the game, a Shaun Livingston layup cut Miami’s lead to one, at 101-100. After a quick Heat timeout, Miami regained possession and point guard Goran Dragic hit one of two free throws after being fouled on a layup attempt.

Then, with 11.7 seconds remaining, Durant dunked it home to give the Warriors a one-point lead.

The supremely confident two-guard took the ball up the court, stopped at the three-point line and jacked up a high-arcing three. The shot went in and American Airlines Arena got as loud as it’s been all season. Stephen Curry had an opportunity to tie the game with 0.6 seconds remaining, but his hurried shot was way off.

“Well, it got harrowing at the end,” Heat head coach Erik Spoelstra said after the nail-biting win. “But you can see our guys are gaining more confidence in these close games.”

As far as Waiters is concerned, confidence has never been an issue, and probably never will be:

“I knew it was good,” Waiters said of the game-winner before it landed. “These are the types of moments I live for.”

Waiters finished 6-of-8 from beyond the arc, with 33 points, five rebounds and four assists. That’s the first time a Heat player has scored 30 or more in back-to-back games since Dwyane Wade. Goran Dragic also did his part with 19 points and five assists, while Hassan Whiteside tallied 10 points and 15 rebounds.

The Heat have now won their fourth game in a row, and after the game, Whiteside was asked how the team has been able to hit its stride as of late: