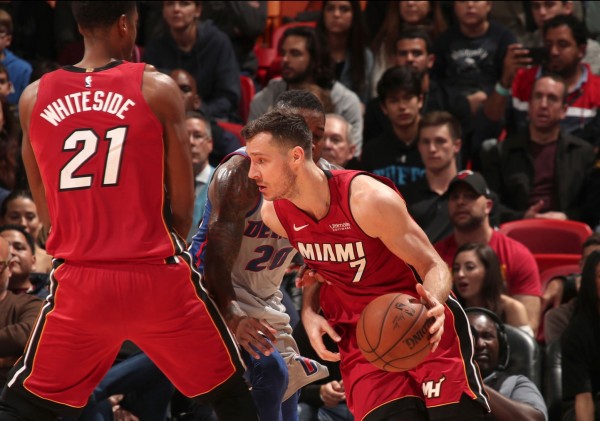 (Miami, FL) – After a four-day break, the Miami Heat looked to keep it rolling on Wednesday night when the Detroit Pistons came to town in a battle of two playoff hopefuls. Both teams treated the contest like a postseason preview and while both squads were missing multiple players to injury, they battled for all four quarters of the game.

Before the clock struck zero, the crowd at American Airlines Arena had enjoyed a game that featured 14 lead changes and 11 ties. In the end, Miami was able to secure the win on the back of several huge individual performances to earn its 20th win on the season, 111-104.

The game played out like a heavyweight battle as neither team allowed the other to gain the upper hand. While the Heat had dominated the start of the third quarter, going on a 12-0 scoring run to claim a 74-67 lead with 5:16 left in the period, the Pistons refused to go away. They went on a 12-2 run of their own in the following few minutes and by the beginning of the final frame, the game was all tied up, 81-81.

Josh Richardson, who scored 22 points in the game, started off the final quarter with an exclamation point when he hit one of his five three-point shots to give Miami a three-point lead. Goran Dragic, who finished the game with his first double-double of the season with 24 points and 13 assists, was sent to the line on the following offensive possession and was able to push the lead to four points.

Detroit continued to hit back, though, and every time the home team sought to take control with a big shot, the Pistons answered with a score of their own. With just under seven minutes left in the game, the score was even once again, 94-94.

Miami took the lead shortly after when Wayne Ellington hit one of his three 3-pointers on the night. Both teams then traded shots at the free-throw line, but when James Johnson hit a three-point shot with 4:34 left in the game and put Miami up five points, American Airlines Arena began to sense the victory.

The Pistons still wouldn’t quit, though, and managed to bring the game to within three points with just over a minute left when Avery Bradley hit a deep three-point shot. Kelly Olynyk answered shortly after to push the lead back to five points with 39 seconds left in the game. Bradley attempted one more desperate three-point attempt on Detroit’s following offensive possession, but when Miami secured the rebound, it was clear that the game had been won.

Olynyk not only scored the game-sealing points, but he also led Miami throughout the night. The 7-foot center scored 13 points in the first half on his way to a memorable performance in which he scored 25 points, secured 13 rebounds, and added three assists to his loaded stat sheet.

Another positive in Wednesday’s game was the return of Johnson, who had missed six of the Heat’s last seven games. The veteran played very well off the bench and finished the night with 16 points and four rebounds in just 24 minutes of play.

“Just keep the offense rolling,” Johnson said of what he hoped to achieve in his return to play. “Since I’ve been out we’ve been trending in a great way offensively and I wasn’t trying to come in and disrupt. I just played along, watching film seeing what they were executing well and just try to implement what I could do.”

Wednesday night’s game was a promising team win for a Miami team that is starting to look more and more like a playoff team with each passing game. While the Heat suffered an embarrassing loss to the Brooklyn Nets last week, they have bounced back to win the next two games in convincing fashion. Perhaps more impressively, they have won nine of their last 13 games and continue to move up in the Eastern Conference standings.

Miami will look to continue its ascent in the standings on Friday night when it welcomes the New York Knicks to South Florida. The gritty Miami squad suffered their biggest loss of the season in a game against the Knicks back in November and will look to settle the score to continue its winning ways.
[xyz-ihs snippet=”HN-300×250-TextnImage”]