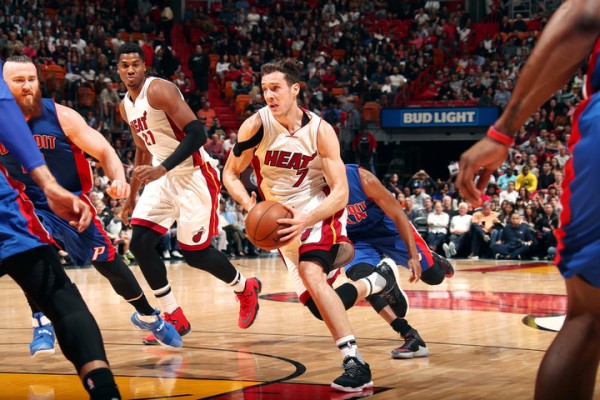 (Miami, FL) – In yet another gutsy come-from-behind effort, the Miami Heat (18-30) won their seventh straight game on Saturday night as they beat the Detroit Pistons (21-26) by a score of 116-103 at American Airlines Arena.

“A lot of high scoring, going back and forth, big plays and neither team could really figure out how to put together extended defensive stops until really with us in the last six or seven minutes,” said Heat head coach Erik Spoelstra during his postgame press conference. “Our toughest, most physical and most committed minutes were there at the end. That was good to see.”

Heat point guard Goran Dragic, who is averaging a whopping 23.3 points per game over Miami’s seven-game winning streak, led all Heat scorers on Saturday night as he went off for 23 points (8-of-14 from the field and 2-of-2 from behind the arc) to go along with four assists and two rebounds.

The dynamic Miami backcourt duo of Dragic and shooting guard Dion Waiters continues to open eyes across the league with its play as of late, as Waiters had an efficient 17 points (13 scored in the first quarter alone) as well as a team-high seven assists and three boards.

“It’s just tough basketball, man,” said Waiters after the game. “It’s a war, and them guys had like five days off, I think. It was a back-to-back for us. It was mental, it was mental.”

With their seventh straight victory, the Heat currently possess the longest winning streak in the NBA and have shown little signs of slowing down.

“We are clicking on all cylinders,” Waiters said. “We’re playing together, having fun, and guys are making plays. We’re just playing the right way. We’re healthy and it’s fun.”

“I think we just turned the corner, man,” Ellington said after Saturday’s victory. “We started off tough, lots of new guys, we didn’t have a lot of luck with injuries, but we’re a team that didn’t make any excuses and I think all that hard work we’ve been putting in has started to pay off for us.”

“Down the stretch, we were terrible,” coach Van Gundy said after the loss.

Up next, the Heat will host their second contest of a four-game homestand on Monday night when they take on the Brooklyn Nets (9-38) at American Airlines Arena. The contest, which is scheduled to tip off shortly after 7:30 p.m. ET, will be broadcast live locally on Fox Sports Sun.
[xyz-ihs snippet=”Responsive-ImagenText”]