Miami Heat vs. Detroit Pistons Game Recap: By the Hand of Whiteside 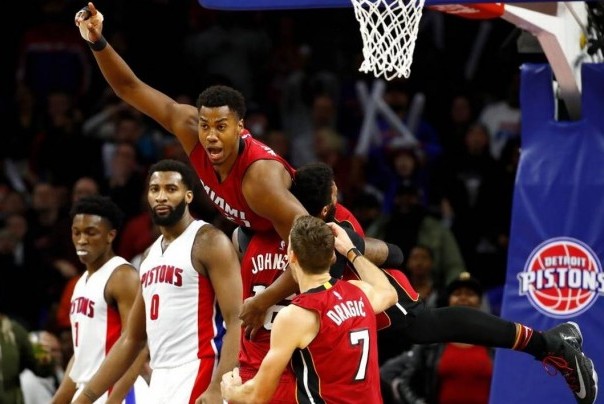 (Detroit, MI) – In a race for the final playoff spots in the Eastern Conference, the Miami Heat (36-38) picked up a critical 97-96 road win on Tuesday over the Detroit Pistons (34-41) at The Palace of Auburn Hills.

Heat star center Hassan Whiteside (17 points and nine rebounds) scored the game-winning basket at the buzzer when he tipped in point guard Goran Dragic‘s missed shot attempt with his left hand, which caused the whole Miami squad to erupt in celebration.

“I’ve got one hand, man. I’ve got one good hand so I had to go with my one good hand,” Whiteside said in reference to his lacerated right hand. “We’re just going to fight, man. These boys are real physical.”

Even without the services of injured shooting guard Dion Waiters, the Heat managed to come back to win despite trailing by four points with under 30 seconds left in the game.

“It was high-level competition tonight. Both teams. It felt like a playoff game,” Heat head coach Erik Spoelstra said after the game. “Both teams understood how desperate the circumstances were. As a fan, as a coach and as a player, you really had to admire and respect the level of intensity both teams were playing with.”

Dragic, who led all scorers with 28 points, shot 9-of-16 from the field while also adding four assists and four rebounds. Power forward James Johnson, who hammered down an and-one posterizing dunk over Pistons power forward Marcus Morris in the fourth quarter, finished with 16 points and six boards.

“Detroit, they’re a tough team. They came back after we had a lead of 10 points,” Dragic said. “We never quit. We said we needed to have this game and we did it.”

Heat guard Rodney McGruder was huge for Miami on both the offensive and defensive end of the floor, as he racked up 12 points, six boards, four assists and two steals.

For Detroit, shooting guard Kentavious Caldwell-Pope finished with a team-high 25 points (9-of-22 from the field) to go along with five boards. Small forward Tobias Harris and point guard Ish Smith each had 19, while center Andre Drummond had nine points, a team-high 13 rebounds, two blocked shots and two steals.

Miami’s win helped it gain more ground in front of the Chicago Bulls (35-39) as the eighth seed in the Eastern Conference playoff race, as it is now one full game ahead of the Bulls and is just one game back of the Indiana Pacers (37-37) for the seventh spot.

The Pistons, who are struggling mightily down the stretch of the season, have now lost five straight games and eight of their last nine.

With only eight games remaining on their regular season schedule, the Heat will remain on the road to take on the New York Knicks (28-46) on Wednesday night in yet another must-win game. The contest, which is scheduled to tip off shortly after 7:30 p.m. ET at Madison Square Garden, will be broadcast live locally on Fox Sports Sun.
[xyz-ihs snippet=”Responsive-ImagenText”]