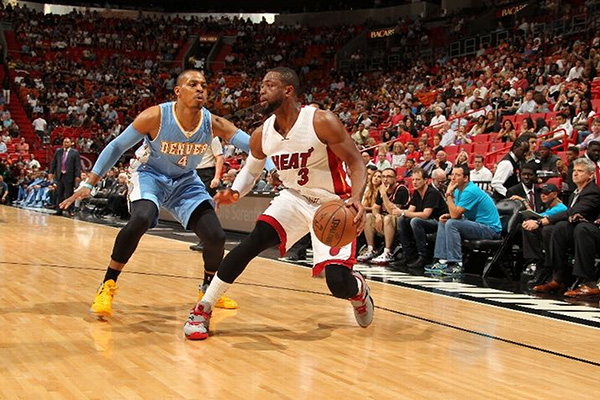 The win, combined with losses by several other teams on the bottom half of the Eastern Conference playoff standings, further solidified the Heat’s postseason hopes and even opened the door to possibly catching the sixth-place Milwaukee Bucks.

Coach Erik Spoelstra hopes the momentum from this win — their third in a row and the longest streak since the first week of the season — and the team’s recent surge at home will carry over into next week’s tough road trip, which will include stops in Oklahoma City, Milwaukee, Boston and Atlanta.

Spo on the #HEATwin: "Hopefully this is something we can build on. We're now going on the road to face some tough opponents."

Star guard Dwyane Wade, who was averaging nearly 27 points and five assists on .517 shooting in his 10 previous games, led all scorers with 22 points on 9-18 from the field.

The Heat got off to a slow start, trailing by as many as 10 points before rallying to pull within one at the end of the first quarter.

Forward Michael Beasley gave the Heat the lead on the first basket of the second quarter, and the team never looked back. Eight different Heat players scored at least one bucket in the quarter, led by Wade, who had eight points. Miami used 77 percent shooting in the second to outscore the Nuggets 37-23 and take a 13-point lead into halftime.

The Nuggets trimmed the Heat lead to five points with a little over three minutes remaining in the third quarter before a 10-6 run by Miami pushed the lead back up to nine heading into the fourth.

Nuggets forward Kenneth Faried, who provided most of Denver’s offense through the first two quarters, bumped his right knee in a collision with Beasley late in the third and left the game. After receiving treatment on the bench, he returned with 7:05 left in the fourth quarter and finished the game with 20 points, six rebounds, two assists, two blocks and four steals. An impressive stat line, but not enough tonight.

The Heat cruised in the fourth quarter and led by as many as 19 points before walking off the court with a 108-91 victory.

Speaking to reporters after the game, Wade expressed pride in the way the team has been able to stay in the hunt for the playoffs despite dealing with numerous injuries all season long: “I’m proud of this organization and this team. They haven’t given up…the best thing to do is keep fighting to give yourself a chance.”

Miami used a balanced scoring attack and solid defense to defeat the Nuggets. Five players scored in double figures for the Heat and the team shot 53.1 percent from the field.

At the other end the Heat held the Nuggets to under 47 percent shooting and outrebounded them 44-35. The Nuggets managed only 13 points in the fourth quarter.

After the game, Coach Spoelstra credited his team’s unselfish play for helping notch another important home victory: “Tonight was a perfect example of everybody having to contribute. Our guys are embracing the ‘just help us win’ (attitude).”

Miami earned a split of the season series with the Nuggets, having lost at Denver in early December, 102-82.

Miami has won its last four games at American Airlines Arena and are 7-1 overall at home in March. This was their final game in South Beach before their upcoming four-game road trip.

There were other games with playoff implications across the NBA tonight. The Milwaukee Bucks and Boston Celtics both lost on the road within minutes of each other, which puts Miami just one game behind sixth-place Milwaukee in the loss column and two games ahead of eighth-place Boston.

The Heat next take on the Oklahoma City Thunder on Sunday at Chesapeake Energy Arena. The Heat will again be going for the season split, as they lost to the Thunder at home in January.

Spoestra sounded an optimistic tone as his team prepares for the Thunder: “We’re going to try and get this thing started off on a good note (in Oklahoma City).”

Sun Sports will broadcast the game on Sunday, which tips off at 3:00 PM EST.
[xyz-ihs snippet=”Responsive-ImagenText”]