Miami Heat vs. Dallas Mavericks Game Recap: The Year of the Dragon 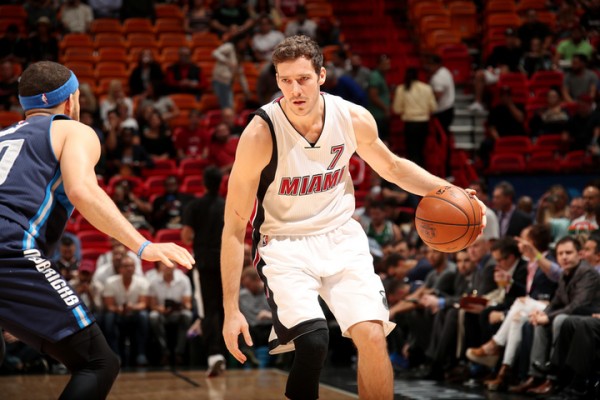 (Miami, FL) — For two franchises that have played each other twice in the NBA Finals, things sure have changed a great deal. One thing that has not changed, however, is the fierce level of competition these teams bring when they face each other.

Thursday night’s matchup between the Miami Heat and Dallas Mavericks wasn’t for a championship, but it sure was a great game, as the Heat edged out the Mavericks late, 99-95.

The first half was a tale of two quarters. While, the Heat outscored the Mavericks 29-22 in the first quarter, Dallas battled back and got hot in the following quarter. Three second-quarter 3-pointers by Wesley Matthews helped the Mavs build a 53-44 lead heading into the half.

At this point, it was the Heat who had to battle back, and battle back they did. With 5:13 remaining in the third quarter, sharpshooter Luke Babbitt hit a corner three to extend an 11-0 run for the Heat and give them a 63-61 lead. After that, Miami and Dallas went back and forth, trading baskets and leads.

It wasn’t until 2:20 remaining in the fourth quarter that the Heat were able to create some separation thanks to a deep 3-pointer by Goran Dragic. That made it 90-85, Miami, and from that point forward, the Heat managed to hold the Mavericks at bay, and close one out at home.

“Just like an old-school Miami-Dallas game,” Heat head coach Erik Spoelstra said with a smile after the win.

Spoelstra’s best player on the night was Dragic, who certainly helped bring back that old-school competitive feel. The Slovenian guard went 4-of-4 from beyond the arc, and scored 11 of his 32 points in the fourth quarter.

“Goran was terrific, he really was,” Spoelstra told reporters. “His game has evolved so much now, not just the three ball, but his ability to put the ball on the floor and hit mid-range pull-ups. Those are the kinds of shots that keep a defense honest, and oftentimes in close fourth-quarter games, they’re the only shots you’re going to get. “

Dragic has been particularly efficient with his shot selection as of late. Over the last five games, he’s averaging 22.6 points on 53.2 percent shooting.

“(He’s) just playing with extreme confidence,” said backcourt mate Dion Waiters. “Taking what they give him, attacking, being aggressive and he’s getting to the free-throw line.”

Like Dragic, Tyler Johnson also came through in the clutch for Miami. The six-foot-four guard scored 23 points, including 10 in the the fourth quarter. Hassan Whiteside, on the other hand, had a modest night by his standards, scoring 13 points and grabbing only eight boards.

For Dallas, nobody was particularly efficient on the night, but Dirk Nowitzki led the way with 19 points, followed closely by Matthews with 18. The loss in Miami ends the Mavs’ three-game win streak. For the Heat, the win gives them their first two-game win streak in more than a month. After the game, Heat reporter Jason Jackson asked Dragic how the team was able to win their second-straight.

“Communication,” Dragic responded. “In the second half we just talked, communicated and everyone did their job and this is the result. We worked hard for this, the whole team. We’ve lost a lot of close games this year but we’re getting better at closing.”

The Heat will go for their third-straight win on Saturday night when they host the Milwaukee Bucks.
[xyz-ihs snippet=”Responsive-ImagenText”]