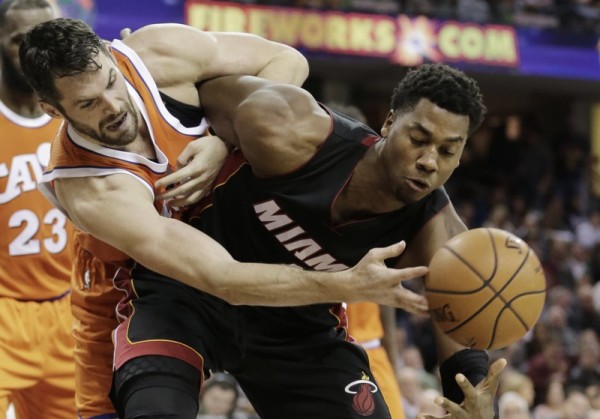 In the first quarter, Miami seemed to be holding its own, to a degree. But by the third quarter, the Heat’s chances took a turn for the worse as the Cavs’ seemingly limitless offensive firepower became too much for Miami to match.

Being short nearly half the team’s roster certainly made things difficult for Miami, but the fact that star big man Hassan Whiteside struggled so much offensively made it that much harder for the Heat to find success in this one. The 7-footer scored only eight points on 4-of-10 shooting on the evening.

“If he does not dominate at the rim, in the paint, we don’t have a chance to win,” Heat head coach Erik Spoelstra said before the game.

Unfortunately for the Heat, Whiteside’s performance was far from dominant.

“It’s tough,” a dejected Goran Dragic said of Whiteside’s underwhelming performance. “It’s tough to win when he’s not at the top of his game. He’s our main piece, he’s our franchise player and we need him.”

While Dragic may have a point, it wasn’t exactly like Whiteside’s teammates helped the Heat’s cause much either.

As a team, the Heat finished with a season-low 34.8 percent field-goal percentage. Also, the 30-point loss was the Heat’s worst of the season, and the 84 points matched a season-low.

Power forward Derrick Williams actually led all Heat scorers in this one with a season-high 18 points, while Dragic added 15 of his own.

As for the Cavaliers, the Big 3 continued its dominant ways. Kevin Love led the team with 28 points and 15 boards. James also filled the stat sheet (per usual) with 27 points, eight rebounds and eight assists, while Kyrie Irving dropped 23 points.

“You saw a championship-level team execute at a championship level,” Spoelstra put it simply after the game. “Their three studs were studs tonight.”

With the win, the Cavaliers now move to 16-5 on the season, while the Heat drop to 7-16. To make matters worse for Miami, it must play its fourth game in five nights Saturday when it faces former Heat superstar Dwyane Wade and the surging Chicago Bulls. The Cavs also play again Saturday. They will host Kemba Walker and the Charlotte Hornets.
[xyz-ihs snippet=”Responsive-ImagenText”]