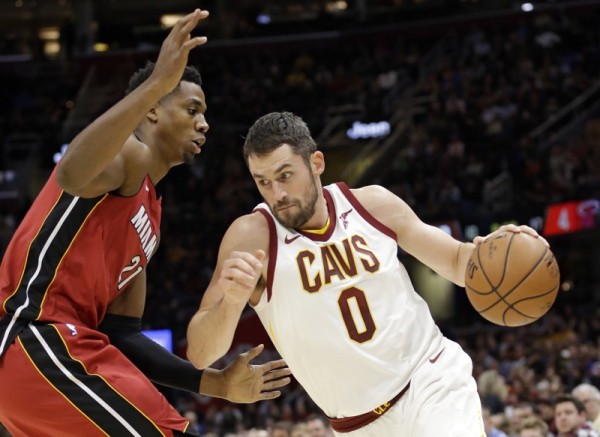 (Cleveland, OH) – The Miami Heat hoped to make a statement on Tuesday night when they faced off against the surging Cleveland Cavaliers, but it was the Cavs who made a statement of their own as they beat the Heat in convincing fashion, 108-97.

“It started right from the beginning, we were playing on our heels, and they felt like a different level than us tonight,” Heat head coach Erik Spoelstra said following the game. “Tonight they’re a better basketball team than us. That’s where we want to get to, but you can see the level that they can go to just in execution and cohesiveness.”

For much of the game, the hungry Miami team that fans had grown accustomed to during its previous three-game winning streak was nowhere to be found. Its uninspired play led to it facing a deficit as large as 34 points in the second half, but when LeBron James was ejected with 1:59 left in the third quarter, and the Heat had reduced the deficit to just 19 points, it looked like they were on the cusp of claiming the late-game momentum necessary to make a run.

With 11:15 left to play in the game’s final period, the Heat were down just 17 points after a Kelly Olynyk fast-break layup. Quicken Loans Arena had fallen silent, and it seemed like a late-game comeback was not out of the question.

With James already in the Cavs locker room, however, Wade’s veteran presence took center stage as the former Heat icon hit three field goals in a row to jumpstart his team’s offense. Wade led the Cavs bench with 17 points but none were as important as the six points he scored early in the final frame to help his team solidify its ninth win in a row.

“He’s only got one ejection in 15 years? That’s pretty good,” Wade said of James’ ejection. “You know what’s bizarre? I only have one ejection in my career versus the Cavs here. I got ejected here once. So his was versus the Heat, go figure.”

Other than the Heat’s late-game comeback attempt, the game seemed to have been decided early on in the contest. While Miami got production from several players, with Dion Waiters finishing the game with 21 points and seven assists, and Bam Adebayo shining off the bench with 19 points, six rebounds and two assists, the team simply could not slow down the Cavs, who jumped to an eye-popping 75-49 first-half lead.

“All my teammates provide energy to me and I just go out there and do the best I can,” Adebayo said of his career-high 19-point performance. “I really appreciate that, I love them like brothers so anytime they acknowledge me, I’m like the baby brother of the family, so any acknowledgement is good with me.”

While Goran Dragic had been a big reason for Miami’s success in the last three games, the point guard failed to make an impact in Tuesday’s game. After averaging 23.6 points per game in the last three contests, Dragic shot just 1-for-5 from the field on Tuesday and finished the game with seven points, four assists, and two rebounds.

Despite finishing the game with yet another double-double (11 points and 14 rebounds), Hassan Whiteside failed to make the impact that the Heat have often enjoyed this season. Similarly, while James Johnson contributed 14 points, three rebounds, and three assists, he suffered two embarrassing lowlights in the game when he went up for a dunk only to be rebuffed by the rim on two different occasions.

Despite the disappointing loss, a nice moment following the game took place between longtime teammates Udonis Haslem and Wade, when the two exchanged jerseys before heading off to their respective locker rooms. While Wade is currently playing in Cleveland, the gesture proved that much of his heart is still in South Florida.

This is gonna give Miami fans the feels, Dwyane Wade and Udonis Haslem exchange jerseys after game. pic.twitter.com/3k5DC8gdzA

Tuesday night’s game was certainly one to forget for the Heat. It was a reminder, however, that even though they have managed to defeat units like the Boston Celtics, Washington Wizards, and other top teams in the NBA, they still have a lot of growing to do before they can match up with the league’s best.

The Heat will look to get back on track when they travel to New York City to face off against the Knicks in the final game of their four-game road trip on Wednesday night.
[xyz-ihs snippet=”HN-300×250-TextnImage”]