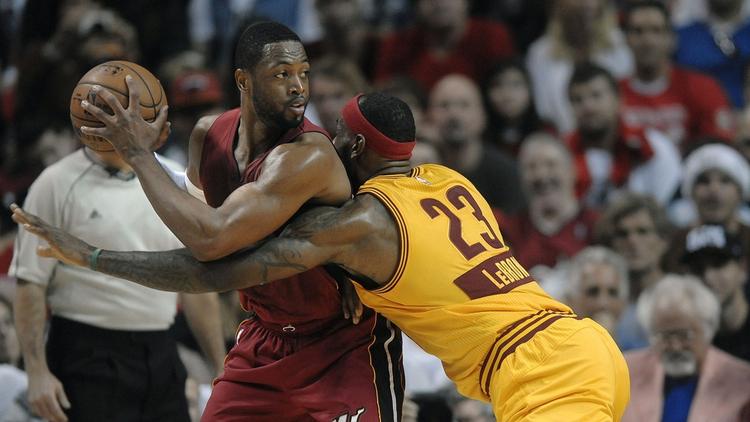 The game was heavily hyped leading up to tipoff despite the clear disparity in the quality of both teams. While the Cavaliers had been 12-3 in their previous 15 games, the Heat had gone just 5-10 during that same stretch.

The main storyline entering the matchup was the return of LeBron James to Miami. James had led the Heat to two NBA championships during his four-year stay in Miami and received a favorable applause from the crowd when he was announced during pregame introductions.

Although it was James who received all of the attention leading into the game, the main focus during the game was the play of Dwyane Wade and Luol Deng. Wade scored 24 points in the first half, giving the Heat a 62-49 cushion at the break. With D3 struggling during the second half, Deng picked up the slack and finished the night with 25 points, eight rebounds and eight assists.

The Cavaliers were led by James, who scored 30 points to go along with eight assists. Kyrie Irving aided the offensive attack with 25 points.

The Christmas Day showdown lived every bit up to the hype as the game was close for most of the evening. Although the Heat led by as many as 17 points during the second quarter, the Cavaliers went on an early third quarter run which pulled them within seven points at the 9:29 mark to cut the deficit to just 64-57. Despite LeBron leaving with a leg injury late in the third, the Cavs went on a 10-3 run in the absence of their franchise player.

An abysmal third quarter which saw the Heat shoot just 5-of-21 from the field led to the Cavaliers trailing just 77-74 entering the final period. It was the fourth quarter that would end up being the most critical period, as the Heat outscored the Cavs, 24-17.

After Cleveland went on a 6-0 run late in the fourth to cut Miami’s lead to just 90-87, Danny Granger hit a left corner three-pointer to push the Heat’s lead back to six. The Cavs wouldn’t bounce back after that, and the Heat finished off Cleveland for just their sixth home victory of the season.

Wade commented on how the Heat were able to close out Cleveland despite struggling in the third quarter:

Wade, Deng and Chris Andersen gashed the Cavaliers in the paint, who clearly missed the presence of Anderson Varejao. It was announced before the game that Varejao would likely miss the rest of the season due to an Achilles injury suffered versus the Minnesota Timberwolves on Tuesday night. Miami outscored Cleveland, 44-28, in the paint.

Andersen finished with a season-high 12 points and eight rebounds, while Granger contributed nine points and seven rebounds on 4-of-5 shooting.

While James finished the night with a nice stat line, he struggled to just 15 points on 3-of-7 shooting during the first half. Despite converting on just three field goals, the “King” finished the opening half with 13 free throw attempts.

Wade gave credit to Deng for limiting James’ effectiveness during the victory:

“I gotta give credit to Luol Deng. He played a hell of a game guarding the best player in the game and being able to have the kind of numbers that he had on the other end of the floor, he was the player of the game tonight.”

The victory will hopefully boost the team’s morale as it continues its home stretch versus the Memphis Grizzlies on Saturday night. The Grizzlies have the fourth-best record in the NBA at 21-7. Tipoff is set for 7:30 pm ET and the game will be broadcast on Sun Sports.