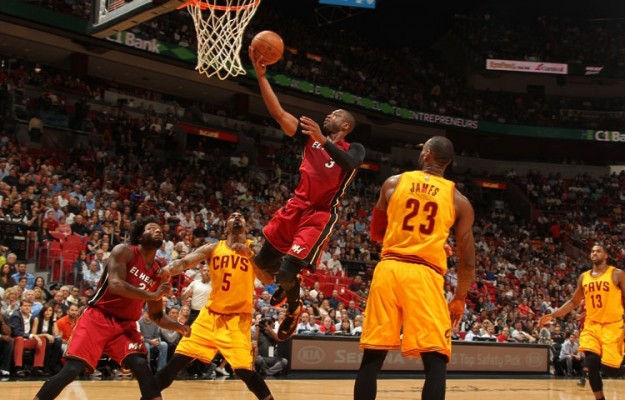 (Miami, FL) — Following a disappointing 109-106 loss Thursday to the Charlotte Hornets, Dwyane Wade and the Miami Heat (40-29) knew they needed to play their best basketball in order to take down the East-leading Cleveland Cavaliers (49-20) on Saturday night.

Wade, who had an abysmal 11 points (3-of-13 shooting) and missed a potential game-tying three Thursday, avenged himself by leading the Heat to a 122-101 domination over the Cavaliers. In the process, the 13-year veteran joined the illustrious 20,000 point club to highlight a 24-point performance.

“To be able to do it at here at home” Wade said after the game. “It was pretty cool. To know that I scored 20,000+ points all in one uniform is the most special thing and a lot if it came here at home. I thank Heat Nation across the world for their support of me. “

To also crush former Heat superstar James, who remains winless in Miami, was a special thing. The Cavs, who were on the second night of a back-to-back, did not appear ready for the fight Miami gave them.

From the get-go, the Heat were active early and fired on all cylinders. The Cavs got a clear look at rising rookie Josh Richardson, who hit four threes in the first two quarters, to help Miami build a lead. Led by Goran Dragic, the Heat closed the first half on a 25-8 run to take a powerful 65-44 lead at halftime, tying their highest point total in a half this season.

The Heat wouldn’t hold back in the second half as they extended their lead and made the blowout official. Wade scored 14 of his 24 points in the third quarter as the Heat led 98-70 heading into the fourth. From there, the Cavs surrendered, going on to lose, 122-101. The Heat now lead the season series, 2-1.

James led the Cavs with 26 points but got very little help from his supporting cast. Kyrie Irving had just 14 points and Love just seven as the two All-Stars struggled heavily to get into a rhythm. Richard Jefferson added 20 points off the bench, most of which came during garbage time.

Helping Wade out, Dragic contributed with 18 points and 11 assists. Budding rookie Richardson put up 19 points and Hassan Whiteside added 16 points and 13 rebounds off the bench. Joe Johnson contributed 18 points on 4-of-6 shooting from downtown. The Heat had 29 assists and outrebounded the Cavs, 42-26, in addition to connecting on 11 of their 19 three-pointers, a positive sign for the team moving forward.

The Heat next take on the New Orleans Pelicans Tuesday night at 8:00 p.m. E/T.
[xyz-ihs snippet=”Responsive-Ad”]