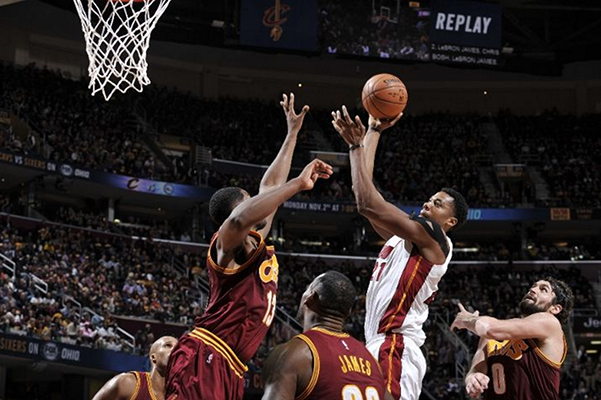 In a game between two Eastern Conference powerhouses, the Cavaliers prevailed as they began to pull away early on in the fourth quarter. Miami was within a few possessions of Cleveland for most of the night, but the Cavs entered the fourth quarter with a 76-67 lead. From that point on, it was all Cavs as they led by as many as 20 points in the final period.

Bosh stated that consistency is a problem for the team right now:

“One thing is just consistency throughout the whole game. That is one thing that we’re lacking. We’re kind of up-and-down in that regard. There are still a lot of things that we have to learn as a unit and that’s going to take time.”

The 13-year veteran was asked what this game showed in regards to how the Heat match up with the Cavaliers:

While the Heat had a balanced scoring attack with five players in double digits, they had a lot of difficulty slowing down the one-two punch of James and Love. LeBron already had 18 points by the half, while Love notched a double-double early on in the third quarter.

“Ultimately, someone is going to have to defend and like I said, win ugly. Keep yourself close enough so that the tide will eventually turn. We have to keep them within striking distance to play through some of those tough offensive possessions…we didn’t defend well enough to win on the road.”

Hassan Whiteside was one of the few bright spots in the loss, as he had two blocks on Cavs big man Tristan Thompson in the paint in the fourth quarter. The 7-foot center had 11 points, nine rebounds and a game-high six blocks in 36 minutes of playing time.

Thompson led the Cavs’ bench attack as they outscored the Heat’s second unit, 32-19. The sixth-year forward had 13 points and eight rebounds on the night, along with a monster block on Bosh in the second half which seemed to energize Cleveland. From the 8:30 mark in the fourth until 1:53 remained in the game, the Heat were down by at least 15 points as the Cavs’ bench unit proved to be the difference in the game.

Goran Dragic also had 11 points for the Heat, while Luol Deng chimed in with 10 points. Amar’e Stoudemire made his debut for the team and had two points and three rebounds in 12 minutes of playing time.

“I was glad to have him out there, we’ll build on this. Obviously you’d like to have more rhythm.”

The Heat will have a day off before traveling back home to play the Houston Rockets. Tip-off is set for 6 p.m. EST on Sunday at American Airlines Arena and the game will be broadcast locally on Sun Sports.
[xyz-ihs snippet=”Responsive-Ad”]