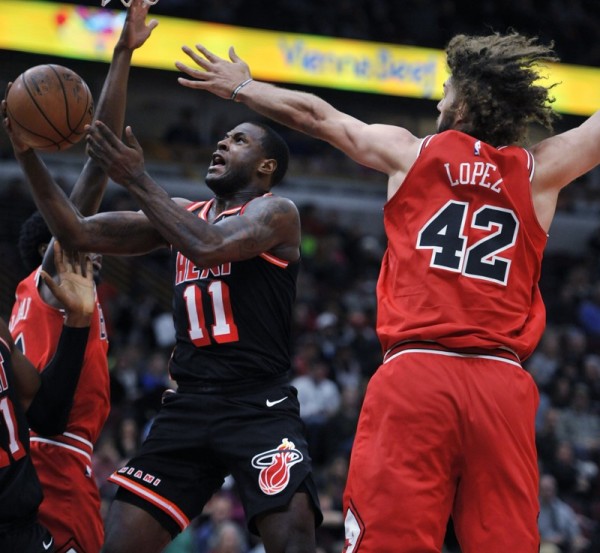 The Miami Heat have enjoyed success against several of the league’s top teams as of late, and on Sunday evening they were able to continue their high level of play against one of the NBA’s worst teams when they traveled to Chicago to beat the Bulls in convincing fashion, 100-93.

While the Heat have struggled late in games throughout the 2017-18 season, they were able to pull ahead on Sunday after the game had remained close throughout. With 8:32 left in the final period, Miami was up, 71-69. Goran Dragic, who scored a game-high 24 points and added three assists and two rebounds, and James Johnson, who had 15 points, seven rebounds, six assists, and two steals, helped their team outscore the Bulls, 24-14, in the crucial minutes of the period on their way to a 95-83 lead with just over a minute remaining in the game.

“We want to be an attacking team,” Dragic said of the team’s solid shooting from beyond the three-point line following the win. “If you’re an attacking team you put pressure on the defense and then most of the teams they shrink, they help. That’s really a good shot for us when you kick the ball out and you feed a set, that’s an easy shot. We want to have as many as possible of those threes.”

What stood out most in the Heat’s victory was the productivity from the team’s bench. While starters like Dion Waiters, Hassan Whiteside, and Justise Winslow struggled to make a huge impact on the game, the team finished with six players scoring in double digits, including all four bench players who played in Sunday’s game.

“They inspired the whole team. We were looking for some kind of energy, some kind of separation, we understood that it was going to be a 48-minute game and they played some inspiring basketball,” Heat head coach Erik Spoelstra said of his bench following the win. “Just some of the energy that the second unit came out with, changed the energy on both sides of the floor, it’s amazing how that works sometimes.”

The bench showed up in the crucial moments of the game throughout the night. The Heat fell behind early in the contest when they managed to score just seven points in the first quarter on 2-for-19 shooting from the field. Thankfully, the their woes on the offensive side didn’t transfer to the defensive side of the ball where they held the Bulls to just 13 points in the first period.

It wasn’t until the second frame that they were able to show life and took the lead on the back of Olynyk, who scored eight points in the quarter, and Ellington, who made three of his five 3-pointers in the period. While Chicago was able to hang around throughout the second half of the game, it never posed a major threat to Miami and did not lead for any part of the final two frames en route to a satisfying Heat victory.

Sunday’s victory marks the Heat’s third win in a row and fourth win in five games. It also marks the first time the 10-9 Heat have had a winning record since Oct. 23 when they started the season 2-1.

The Heat will look to continue their winning ways when they travel to Cleveland on Tuesday to face off against the surging Cavaliers who are enjoying a seven-game win streak of their own. It will mark yet another test for a hungry Heat squad as they look to secure themselves amongst the upper echelon of the Eastern Conference.
[xyz-ihs snippet=”HN-300×250-TextnImage”]