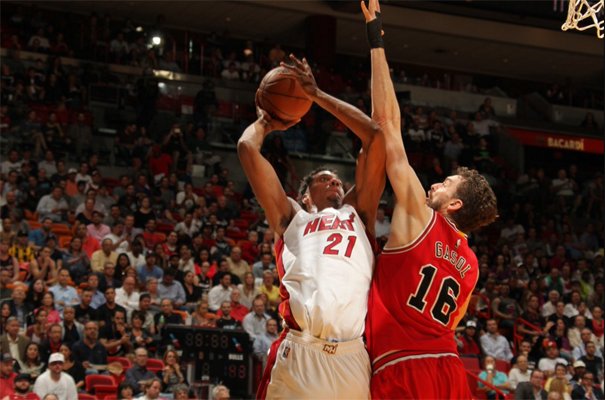 (Miami, FL) — The Miami Heat played their best basketball of the season Tuesday night, as they routed the Chicago Bulls 129-111. With a roster of only eight active players, the Heat were able to notch a season high in points and finish with the best field-goal percentage of any team in an NBA game this season at 67.5%. That mark is also a Heat franchise record.

“It’s fun when you have a game like this and everybody just seems like they’re on fire,” said Heat guard Josh Richardson after the game.

This one was a shootout from the very beginning as both teams started red hot. By the second quarter, Chicago elected to deploy the Hack-A-Whiteside strategy, but to no avail. Hassan Whiteside has been lights out from the line lately. He was 9-for-10 Tuesday night and has made 21 of his last 23 free throw attempts overall. In addition, he scored a career-high 26 points to go along with 14 rebounds and four blocks.

“I’d rather have a career high in blocks but you know I’ll take the points.” Whiteside told Jason Jackson after the game.

He also helped the Heat score a season high 74 points in the paint.

He wasn’t the only guy who had it going for Miami though. Dwyane Wade had 18, Goran Dragic had a season high 11 assists to go along with his 18 points and Joe Johnson looked very comfortable in his first home game as a member of the Heat, as he tallied 24 points, five rebounds and four assists.

After the game, Heat head coach Erik Spoelstra spoke about Johnson and the team’s stellar performance:

“We want to play with pace and spacing. He helps your spacing quite a bit and guys that are veteran-savvy, high IQ players, they know how to make it work and when you put a bunch of those guys on the court together, they tend to make it look a little easier than it really is.”

Chicago pulled within six midway through the fourth quarter, but failed to get stops on the other end as Miami ended the game on a 21-9 run. The Bulls have now allowed opponents to score over 100 points for the 14th game in a row.

“A lot of it has to do with our lack of toughness,” Bulls head coach Fred Hoiberg told the media after the game. “We just didn’t come out of the gate with the right mindset.”

With Jimmy Butler still sidelined and Joakim Noah out for the season, the Bulls must rely heavily on the veteran leadership of Pau Gasol and the oft-ailing Derrick Rose. They will travel to Orlando next for their second game of a back-to-back. As for Miami, they will host a Phoenix Suns team on Thursday that recently lost to the Charlotte Hornets by a whopping 34 points.
[xyz-ihs snippet=”Responsive-Ad”]