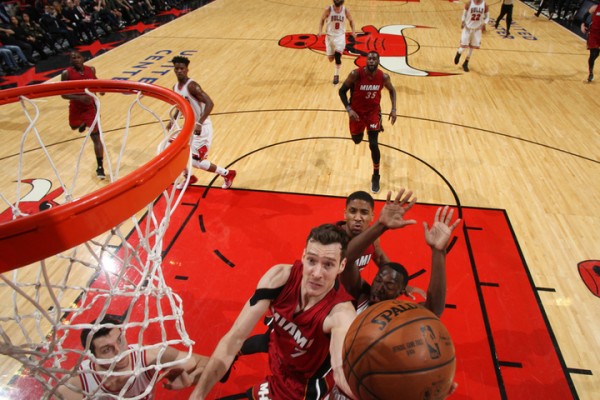 (Chicago, IL) – Following their thrilling come-from-behind victory over the Brooklyn Nets on Wednesday, the Miami Heat (17-30) made another statement on the road as they cruised to a 100-88 win over the Chicago Bulls (23-25) on Friday night at United Center.

On a night when they were without rising star center Hassan Whiteside due to a sprained ankle, the Heat were able to step up in his absence en route to a sixth straight victory. The six-game winning streak — their first since February of 2014 — now puts the Heat only five-and-a-half games behind the Bulls for the eighth playoff spot in the Eastern Conference.

Heat point guard Goran Dragic was magnificent as he finished with a game-high 26 points, 11 assists, five rebounds and three steals.

The Heat, who were tied with the Bulls at 53 points apiece at halftime, managed to build their lead to as much as 20 points with 4:39 remaining in the fourth quarter.

“Just stick with our plan. If we are the most physical team on the court, then it’s so much easier for us,” said Dragic after the game. “After halftime, it felt like we opened the game well then they made some plays, but the third and fourth quarter we were the more physical team. When we do that, we got open shots, we rebounded, and scored some easy baskets in transition. You can see the results.”

Starting in place of Whiteside, center Willie Reed had one of his best games in a Heat uniform as he went off for 20 points (9-of-11 shots made from the floor) and grabbed five rebounds in 37 minutes of action.

“I just wanted to bring energy to this team and help us get off to a good start when my name was called today,” Reed said. “I’m just glad we pulled off the win. We’re all doing it together. It doesn’t matter who gets the shine, we just going out there defending for each other and giving it everything we have every time we step out on the floor.”

Miami managed to score 26 points as a team off of 20 Chicago turnovers, which made Heat head coach Erik Spoelstra even more pleased.

“I really liked the toughness in the second half, in particular,” Spoelstra said after Friday’s victory. “In the first half, both teams were kind of feeling each other out. A lot of good offensive plays for both teams. But we talked about it at halftime, the first team to really impose their will on the defensive side of the floor and really make it tough, make multiple efforts and do the tough physical things would have the best chance to win the game.”

Starting shooting guard Dion Waiters and reserve guard Wayne Ellington both scored in double figures for the Heat as well, racking up 19 and 14 points respectively.

In a losing effort for the Bulls, former Heat superstar shooting guard Dwyane Wade came off the bench to lead his team in scoring with 15 points, six boards, three assists and two steals. Both Wade and small forward Jimmy Butler were not in the starting lineup in Friday night’s game as punishment for comments made about the Bulls following their 119-114 loss to the Atlanta Hawks on Wednesday.

Butler, who led his team in minutes played with 33, was a horrendous 1-of-13 shooting from the floor and finished with just three points. Point guard Rajon Rondo had 13 points, seven assists and seven rebounds for the Bulls, while forwards Taj Gibson and Paul Zipser had 14 points apiece.

Up next, the Heat will return to Miami for a four-game homestand and look for their seventh straight win on Saturday night when they host the Detroit Pistons (21-25) at American Airlines Arena. The contest, which is scheduled to tip off shortly after 7:30 p.m. ET, will be broadcast live locally on Fox Sports Sun.
[xyz-ihs snippet=”Responsive-ImagenText”]