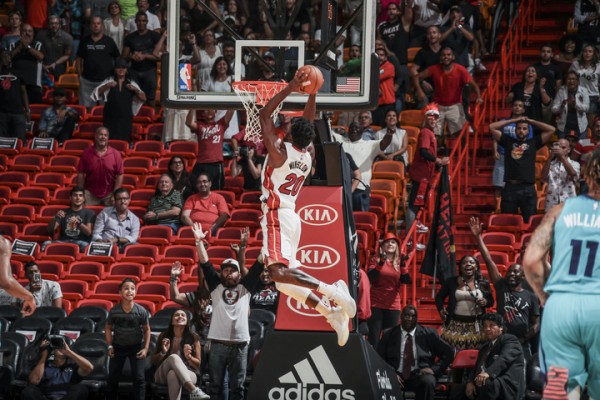 (Miami, FL) – In an exciting game that came down to the final possession, the Miami Heat (2-2) came from behind to squeak out a 109-106 victory over the Charlotte Hornets (1-2) on Monday night at American Airlines Arena.

In the closing minutes of the contest, the hero of the evening for the Heat was forward Justise Winslow, who came through in the clutch.

Winslow, the 10th overall pick in the 2015 NBA Draft, scored the go-ahead basket and then iced the game late with a breakaway dunk for his only two baskets on the night.

Miami had seven different players score in double figures on the night, with guards Josh Richardson and Tyler Johnson leading the way with 18 points apiece.

The Heat, who led by as many as 12 points in the first half before squandering the lead away, managed to claw their way back into the game for an exciting win at home in the preseason.

The newly acquired Kelly Olynyk (13 points, 12 rebounds and four assists) and Heat star center Hassan Whiteside (11 points, 11 boards, and two steals) will look to translate their early success to the regular season after double-double efforts from both players.

“Make the game easier for everybody out there,” Olynyk said. “It’s been a lot different, but it pays off. It pays off, definitely. It’s cool when everybody buys in and everybody’s going through it together. It really brings people close. That’s what a team is made of.”

Heat guard Dion Waiters finished with 14 points and a team-high eight assists on the night, while forward James Johnson came off the bench for a 13-point effort to go along with four rebounds and four assists.

For the Hornets, rookie guard Malik Monk led the way off the bench with a game-high 19 points and four assists, while newly acquired center Dwight Howard had 16 points, six boards and an impressive four steals on the night.

Up next, the Heat will remain home to take on the Washington Wizards at American Airlines Arena on Wednesday night. The contest, which will tip off shortly after 7:30 p.m. ET, will be broadcast live locally on Fox Sports Sun.
[xyz-ihs snippet=”Responsive-ImagenText”]