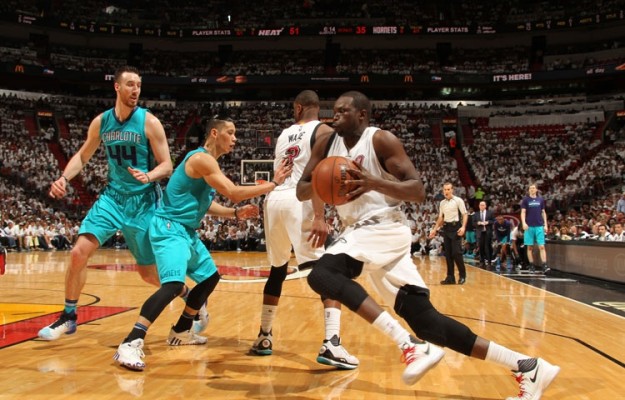 (Miami, FL) —  The Miami Heat kicked off their 2016 NBA Playoffs with a bang. In a dominant, well-rounded effort, Miami started things off by posting their best quarter in playoff franchise history with 41 points. In the end, the Heat won their first playoff game since 2014, 123 to 91.

Unlike Wednesday night’s game against the Boston Celtics, Miami continued to bring the pressure throughout the entire game. The hot-shooting Heat built a 24-point lead early in the third quarter and the deficit simply became insurmountable for the outmatched Hornets.

It was an impressive outing for Luol Deng, who was playing in his first playoff game since 2013. He led all scorers with 31 points, 12 of which were from beyond the arc. Heat coach Erik Spoelstra spoke about his efforts in the postgame presser:

“It’s not the scoring. Everybody always just notices that last number and that’s the tough thing about basic statistics. He’s been doing a lot of things for us for several months. Defensively, he’s been a catalyst and he’s been leading, he really has been leading probably as much as he ever has.”

Hassan Whiteside was in top form as well as he racked up 21 points, 11 rebounds and three blocks on the evening.

“We’re in the playoffs. It’s all or nothing. Leave it all on the court or nothing. We just came out here and played our hearts out as a team,” Whiteside said after the game.

Dwyane Wade added 16 points of his own and once again led the team in the plus/minus category.

The true X-factor for Miami, though, was their total team effort. As a unit, Miami notched 42 rebounds, 27 assists and 56 points in the paint in comparison to Charlotte’s 28, 11 and 36, respectively. In addition, five Heat players scored in double figures and Miami’s 123 points mark a new franchise record for a playoff game. Their 49 field goals also set a playoff franchise record.

“We’re not going to play a lot of perfect games but I feel like tonight was a perfect game,” Heat guard Goran Dragic said after the game. “The key was not to turn the ball over. We had only six turnovers and our defense was great. We didn’t allow them to shoot a lot of threes. They shot only 17 threes. Usually they shoot close to 30.”

Nicolas Batum led his team in scoring with 24 points. Kemba Walker added 19. Charlotte will have to see a major uptick on the offensive end if they hope to win even a game in this first-round series.

“So we lost one game,” Hornets coach Steve Clifford said, “but obviously, particularly up front, we just got manhandled. And if Deng and Whiteside are going to combine for that kind of numbers, it’s going to be hard for us to win.”

The Heat now lead the series 1-0 and will have the opportunity to get plenty of rest after this one, as Game 2 doesn’t tip off until Wednesday night. Miami will likely enter the matchup with their heads held high, as they look to build on a dominant Game 1 performance.
[xyz-ihs snippet=”Responsive-Ad”]