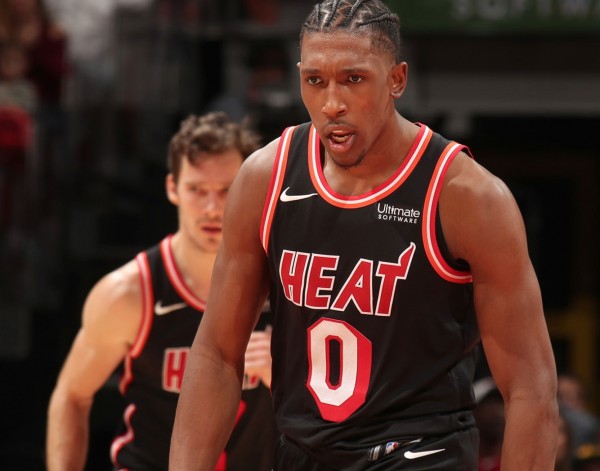 (Miami, FL) – One way to get yourself out of a two-game skid is to play a team dealing with a losing streak of its own. That’s exactly what the Miami Heat hoped to do on Friday night when they faced off against the Charlotte Hornets, who had lost their three previous contests. While the Heat fell behind early, trailing by as many as 15 in the first quarter, they battled back and managed to claim victory in front of their faithful fans, 105-100.

It was a hard-fought victory that would not have been possible without an offensive explosion from shooting guard Josh Richardson, who scored a career-high 27 points and went 11-for-14 from the field and 3-for-4 from beyond the arc.

“This is the player who looked like this coming out of training camp and after preseason, but you know what? You do have to credit J-Rich (Richardson) for his character, his competitiveness,” Heat head coach Erik Spoelstra said of Richardson’s impressive performance. “Even while he’s been struggling from the field, he’s been an All-NBA defender.”

The hungry Miami squad fought back to erase their early double-digit deficit, and for much of the third quarter enjoyed a slim but steady advantage. With just under five minutes left in the third period, however, the Hornets reclaimed the lead. What followed was a flurry of points in which the lead changed five times before the Heat took a four-point advantage heading into the final frame.

In the first half of the fourth quarter, both teams continued to trade shots and the lead. With 6:50 left in the game, Hornets big man Frank Kaminsky hit two huge free throws to put his team up, 88-85. After battling all the way back, it seemed like the Heat were going to wilt in the final minutes of the game as they have done in previous games this season. Dion Waiters, who had 19 points and shot 4-for-9 from behind the arc, however, had other plans. After several scoreless possessions, the streaky shooting guard hit a clutch 3-pointer to bring the game back to a tie. The Hornets reclaimed the lead on the following possession, but James Johnson, who finished the game with eight points, six rebounds, and four assists, drove to basket to even the score, 90-90.

Both teams traded baskets and the momentum, but the dial swung in favor of the Heat when Richardson slashed into the lane before being fouled on his way to a three-point play. American Airlines Arena erupted, and with the help of their devoted fans, the Heat shot ahead to a six-point lead after Waiters hit another 3-pointer. While the Hornets attempted to get themselves back into the game in the waning moments, the victory had been sealed and the celebration began.

“I’ve been working on my game a lot and I’ve been knocking it down in practice everyday in workouts but I had to translate it,” Richardson said before talking about how his team fought its way back into the game. “We just had to have a little yelling match a little bit in the huddle and get ourselves together, but it’s good for us.”

While the game had a wholly positive result for the Heat, the beginning of the game was the complete opposite. The Hornets outscored the Heat, 16-1, to begin the game and it looked like the contest was going to be decided before the first half came to an end. Richardson and Kelly Olynyk, who added 10 points, six assists, and four rebounds off the bench, kickstarted their team’s scoring, however, and by the end of the first quarter, their deficit had been cut to eight points.

Still, there was work to be done in the second quarter. Luckily, Wayne Ellington managed to find his stroke from beyond the arc once again and hit three of his four 3-pointers in the period. With 2:43 left in the half, the Heat claimed their first lead of the night, 44-43, and while they went into the locker room up just one point at the half, the momentum of the first-half comeback helped propel them throughout the rest of the game to the much-needed win.

With the exception of Richardson and Waiters, Miami’s starters failed to make much of an impact on the offensive side of the ball. Goran Dragic struggled for his third game in a row and finished the game with just seven points. While small forward Justise Winslow logged just seven points as well, he did record 11 rebounds, many of which came at crucial moments in the game. Bam Adebayo scored just one point in the game, but his greatest impact came in the form of getting Hornets center Dwight Howard into early foul trouble. Thanks to Adebayo, Howard recorded his fourth foul with just over 10 minutes remaining in the third quarter. Minutes later, he recorded his fifth foul and did not return for the rest of the game.

“Looking at it as like, he’s another player just like I’m another player,” Adebayo said about facing off against Howard. “So just going out there and doing what I got to do, and we came out with the W.”

It was not a pretty victory by any means, but the scrappy Heat team finally proved that they could battle back from a large deficit to claim victory. The Heat will now look to make a statement against the defending NBA champion Golden State Warriors. While securing a victory against the Warriors’ super-powered roster may seem like a long shot, the Heat have played a lot of their best basketball when facing off against some of the best teams in the league. They’ll look to continue that trend when they travel to Oracle Arena this Sunday night.
[xyz-ihs snippet=”Responsive-ImagenText”]